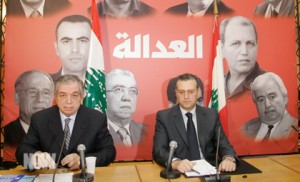 Jisr reminded Raad that there was a consensus on the Special Tribunal for Lebanon (STL) during the national dialogue talks.

Responding to Raad’s statement that the Lebanese cabinet which approved the STL was illegitimate, Jisr said that Article 69 of the constitution states the cases in which the cabinet is considered as resigned.

The March 8 coalition’s argument that ministers of a certain sect resigned from the cabinet does not mean the cabinet is illegitimate, Jisr said

On allegations that the STL’s establishment violates Lebanon’s legitimacy, Jisr said, “It seems Raad forgot that the [STL was established] based on a decision made by the UN Security Council under Charter 7.”

“The STL was unanimously adopted at the dialogue table and was not an issue of discussion even after May 7 and Doha agreement,” Jisr stressed

Article 408 of the Lebanese constitution states that testimonies given to the international investigation commission into the 2005 assassination of former Prime Minister Rafik Hariri are not considered “false testimonies,” Hobeich said.

Hobeich accused Raad of “trying to give the impression that Daniel Bellemare’s office sought to find a legal Fatwa to stop pursuing the false witnesses’ issue.”

“We have no idea whether the indictments are based on telecommunications evidence,” Hobeich told Raad.

Hobeich called for establishing a national commission to submit a report on infiltration of the telecom sector that can then be sent to the tribunal to inform it that telecom data cannot be depended on because it is infiltrated.

During a press conference earlier in December, Raad said the mechanisms used by the STL have turned the court into an instrument serving foreign agendas at Lebanon’s expense.

“You are heading toward indictments based on so-called telecommunications evidence. This is not evidence. Such evidence has absolutely no value,” Hezbollah chief Sayyed Hassan Nasrallah had said, addressing STL Prosecutor Daniel Bellemare.

Turning to Nasrallah regarding leaks from Gerhard Lehmann, Hobeich said: “Yes, this is how documents are leaked in the West. But isn’t the leaker contacted?

“Who pays these huge amounts of cash in exchange for leaked documents and what are the motives?” Hobeich asked.

Hobeich stressed that the STL is independent.

“Such courts develop their own rules since they are independent. The international tribunal is totally independent of the U.N. Security Council. ” Hobeich stressed.

In reference to the May 2008 report by Germany’s Der Spiegel magazine that the STL will indict Hezbollah members, Hobeich asked: “Should we hold the international investigation responsible for the media reports which we are not sure how accurate they are?