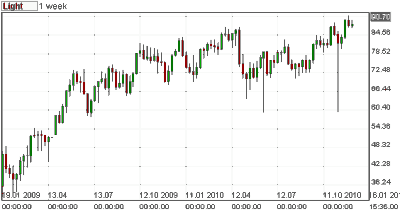 Crude traded little changed within 1 percent of a two-year high as economic growth in the U.S. and colder temperatures in the northern hemisphere whittle down excess fuel stockpiles.

Futures climbed as much as 0.3 percent after U.S. government reports yesterday showed U.S. crude supplies fell last week to the lowest in 10 months and gross domestic product expanded 2.6 percent in the third quarter. Oil rose as high as $90.80 yesterday, the strongest since Oct. 8, 2008.

“Weather in the U.S. and Europe is supportive, and we had another big inventory drop,” said Tobias Merath, head of commodities at Credit Suisse Group in Zurich. “But these are mostly temporary factors, and when these fade I see a risk we’ll move to the mid-$80s at the beginning of next year.”

Thousands of airline and train passengers were marooned across Europe during a storm system that produced Britain’s worst early snowfall in 17 years.

Crude, which surged 78 percent in 2009, has gained 14 percent this year as the global economic recovery increases demand and cuts stockpiles.

U.S. crude inventories fell 5.33 million barrels to 340.7 million in the week ended Dec. 17, the Energy Department said. That’s the lowest since Feb. 19. A decline of 3.4 million barrels was forecast, according to the median estimate from 14 analysts surveyed by Bloomberg News.

“We are bullish on oil in the short, medium and long term,” Michael Haigh, global head of commodities research at Standard Chartered Plc in Singapore, said in an interview on Bloomberg Television. “Over the next year we’re seeing oil creeping up into the mid-$90s.”

Supplies along the Gulf Coast, which holds almost half of U.S. refinery capacity, dropped 6.08 million barrels to 167.3 million, the lowest since Jan. 22, according to the Energy Department.

Stockpiles of distillate fuels, which include heating oil and diesel, dropped 589,000 barrels to 160.7 million, the first decrease in three weeks, according to the department. Gasoline inventories increased 2.4 million barrels to 217.2 million. Bloomberg