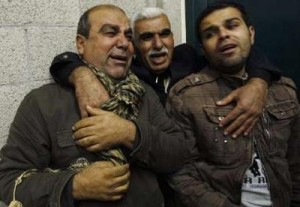 The Israel Defense Forces said, in a statement, that its aircraft “targeted” and struck “a squad of terror operatives who were preparing to launch rockets towards Israeli territory” from that area. The statement did not detail if there were any fatalities as a result.

Citing eyewitnesses, the Palestinian Authority-controlled news agency Wafa reported that five people had been “martyred” in what it described as an “Israeli drone strike.” The incident took place in the Qarara neighborhood, east of Deir Balah.

The strike comes the same week that the general heading the Israeli government’s program to ease the economic blockade of Gaza cited major progress in boosting the flow of goods into the territory.

Major Gen. Eitan Dangot estimated Tuesday that 300 trucks per day could soon pass through the Kerem Shalom crossing point — up from 80 to 90 such trucks before last June. But he also sounded a note of concern regarding what he called the recent upswing of rockets and mortars fired into Israel by Palestinian militants from inside Gaza. Israel’s military said Saturday that more than 200 such missiles, rockets and mortar shells have been fired onto its soil since the beginning of this year.

“In the last weeks, we are facing launching of rockets and mortar shells around Gaza, all over from the north to the south at Kerem Shalom,” he said.

But a recent report about conditions in Gaza — entitled “Dashed Hopes: Continuation of the Gaza Blockade” and signed by 22 groups — presented a much bleaker picture in Gaza.

“Israel’s failure to live up to its commitments and the lack of international action to lift the blockade are depriving Palestinians in Gaza of access to clean water, electricity, jobs and a peaceful future,” said Jeremy Hobbs, director of Oxfam International, one of the groups that signed the report. “Only a fraction of the aid needed has made it to the civilians trapped in Gaza.” CNN

Photo: Relatives of a Palestinian militant react after he was killed in an Israeli air strike on the central Gaza Strip December 18, 2010.