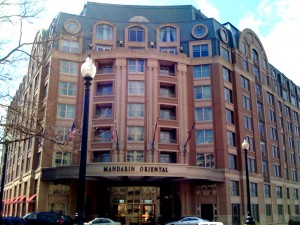 Muslim employees of the Mandarin Oriental Hotel in Washington said they felt discriminated against after being barred over the weekend from floors where an Israeli delegation was staying, a Muslim advocacy group said.

One hotel worker whose duties involve going to all the hotel’s floors said he was preparing for his shift Friday when his supervisor told him to steer clear of the eighth and ninth floors, where Israeli Defense Minister Ehud Barak and his delegation had booked rooms.

“I said, ‘Why?’â” said the worker, who is Muslim and wanted to remain unidentified to protect his job. He said his supervisor told him, “They’re Israelis there, and they don’t want no face-to-face with Muslims.”

The hotel’s general manager, Amanda Hyndman, said the hotel rearranged some shifts and told some workers not to come in after a routine State Department background check found “irregularities” in the checks of 12 employees.

“We don’t know the reasons why,” Hyndman said, adding that not all the people on the list were Muslim. She said she did not know whether any Muslim employees were allowed to work on the eighth and ninth floors over the weekend.

After receiving a letter Tuesday from the Washington-based Council on American-Islamic Relations, Hyndman said the hotel planned to investigate the incident. “We uphold our policies of anti-discrimination,” she said.

An official at the Israeli Embassy said that “as a policy, the embassy does not discuss the logistical arrangements for visiting Israeli officials.”

A State Department official said routine background checks are conducted on people who “may have access to, or be working in, the vicinity of the official we are protecting.” The official said that “at no time do these checks include questions regarding religious or political affiliation” and that the same standards are applied for for all delegations.

Ibrahim Hooper, a spokesman for CAIR, said that the organization was waiting for a formal response from the hotel and that it might consider litigation. “We need to determine what criteria were used to remove these people from their positions,” he said. “It’s of concern to us that there’s at least a perception that they were singled out because they were Muslim or Middle Eastern.”

The one worker said that after he was barred from the floors in question, co-workers teased him about being a terrorist.

“In the cafeteria, they were looking at me, laughing, saying: ‘Ah, they don’t want you there. They maybe think you have a bomb in your belly,’â” said the worker, who came to the United States from Africa more than two decades ago.

He said he had worked in proximity to other VIPs, such as George W. Bush, with no security concerns.

In a similar case in 2004, a Muslim security guard at the Madison Hotel was told to stay away from the 10th floor while an Israeli delegation was there. In that case, the hotel’s general manager said the request was made by security units guarding the delegation.