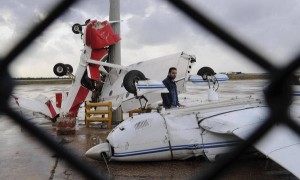 Heavy rain and fierce winds pummeled countries across the Middle East on Sunday, killing a woman in Lebanon, sinking a ship off Israel’s coast and prompting Egypt to close its largest Mediterranean port.

The storm, which caused temperatures to plunge to below freezing in some places, ended weeks of unseasonably warm and dry weather across the region that caused dozens of forest fires in Lebanon and helped feed a massive blaze in Israel that destroyed thousands of hectares of forest.

It whipped up dust storms in Egypt and Jordan, while in the Syrian capital of Damascus, snow blanketed the streets for first time this winter. Schools sent students home early and children ventured outside to play.

Heavy rain and strong winds battered cities along the Mediterranean coast. Syrian authorities closed their main port of Tartous, while Egypt shut down the port of Alexandria — the country’s largest — as well as another in Nuweiba.

Off the Israeli coast, a Moldovan cargo ship sunk in stormy weather Sunday about 7 miles (11 kilometers) near the port city of Ashdod.

An official from Israel’s shipping and ports authority, Yigal Maor, said the vessel’s 11-member crew scrambled onto lifeboats and was rescued by a nearby Taiwanese ship. He told Israel Radio that high waves and winds complicated the rescue operation.

Israel Radio said the ship had a Ukrainian and was reportedly carrying a shipment of steel.

Elsewhere in Israel, rain and hail battered the country while strong winds toppled trees and traffic lights, snarling traffic, flooding streets and knocking out electricity to hundreds of homes. Local media reported that a pier at the ancient port city of Caesarea collapsed, a breakfront at another beach cracked and towering waves washed over the shore of Eilat, a desert resort.

Police spokesman Micky Rosenfeld said northern Israel was hit hardest by the storm, and that extra police patrols were dispatched to divert traffic because of downed trees. Two police officers were injured slightly when a tree fell on their patrol car, Rosenfeld said.

In Lebanon, heavy rains flooded the streets in Beirut and snow forced some road closures in remote mountain towns. A woman died Saturday night when an uprooted tree fell on her car in the northern port city of Tripoli, authorities said.

The storm also caused delays in incoming and outgoing flights from Beirut airport and heavily damaged four small training planes parked on the tarmac, flipping some and ramming others into a nearby electricity pole on Saturday.

In Jordan, the Weather Department urged citizens to avoid valleys because of the threat of flash floods.

Police said dust-laden winds reaching up to 55 miles (90 kilometers) per hour obscured road visibility and forced the closure of major highways in the eastern desert linking Jordan with neighboring Iraq and southern roads leading to the ancient city of Petra, a major tourist attraction.

A police statement said low visibility caused a 10-car pileup in a district south of the capital Amman, which left 16 people injured.

Amman airport reported up to two-hour delays in domestic and international flights as a result of the dust storm.