by yalibnan
1044
By: James Zogby As Lebanon waits for the STL indictment, the slogan "unity or justice" should be rejected as establishing a false dichotomy. Lebanon needs both.
Share: 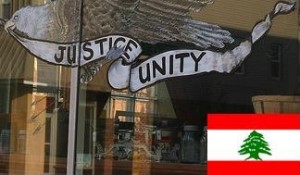 Lebanon and its friends around the world are on edge waiting for indictments to be issued related to the assassination of Prime Minister Rafiq al Hariri. The investigators working on this case are apparently nearing the completion of their inquiry and are preparing to submit their findings to the International Tribunal–possibly within a matter of days. Based on what are claimed to be “leaks”, there have been suggestions that the indictments will charge members of Hizbullah in the crime. In response, there has been a flurry of diplomatic activity in an effort to calm tensions, while Hizbullah, for its part, has paralyzed the work of the government and issued vague, and not so vague, threats saying that they will not allow any of their cadres to be charged. This has roiled the country with many fearing a return to civil strife or worse.

Before any more threats are issued, fingernails are bitten, or anti-anxiety pills are swallowed, let us consider a few points.

First, no one knows what the investigators may have found. We do not know whom they will indict or what evidence they will present to back up their findings. All that is being discussed right now are rumors, from a variety of questionable sources, based on information claiming to come from “leaks”.

Given this, it is not the Tribunal but the campaign to discredit the work of the investigators that must be questioned. How and why, we must ask, is there such an intense effort to denounce what we still don’t know? Since no one has yet been indicted, and the evidence is still unrevealed, mobilizing a campaign against the Tribunal is, at best, premature, and, at worst, risks raising suspicions about the motives of the campaigners, themselves.

It is important to also remember that indictments, when they are issued, are just that, indictments – not judgments or verdicts. The sealed work of the investigators will go to a pre-trial judge who will then take between six to eight weeks to review the findings and then make a determination as to whether or not they create sufficient grounds to merit prosecution. Only if the judge agrees to proceed will arrest warrants be issued. Note that it is only at this point that the names of those to be indicted may become official and public.

What should then follow is a trial at which time the prosecution will reveal the evidence on which the indictments have been based, and the indicted individuals will be able to contest all this – either by challenging the prosecution’s evidence or presenting evidence of their own in an effort to prove their innocence.

This is the process that should be followed. It is open, transparent and fair, providing justice for the society at large and guaranteeing the rights of the accused to confront and challenge in open court the charges against them.

Fearing the worst, there are those in Lebanon who suggest that the country cannot afford to allow the work of the Tribunal to proceed. They say that Lebanon must make a choice between unity and justice. This, I believe, is a false choice, since Lebanon must have both if it is to survive as a nation and flourish as a democracy. With the memory of Lebanon’s long war still too fresh to be forgotten, and with too many Lebanese leaders having been assassinated in just the past few decades, the threat of violence or bullying cannot be allowed to define the way the country resolves its disagreements. If Lebanon is to remain whole and prosper, it must put away threats and agree to resolve differences in public debate, through the ballot box, or in open court.

Our polling clearly establishes that most Lebanese, across factional and sectarian lines, agree. They seek national unity and reconciliation, and they demand justice for the killing of Rafiq al Hariri, those who lost their lives with him, and those who were murdered in the years that followed. The people are right.

The slogan “unity or justice” should be rejected as establishing a false dichotomy. Lebanon needs both.

Dr. James J. Zogby is the author of Arab Voices: What They Are Saying to Us, and Why it Matters (Palgrave Macmillan, October 2010) and the founder and president of the Arab American Institute (AAI), a Washington, D.C.-based organization which serves as the political and policy research arm of the Arab American community.