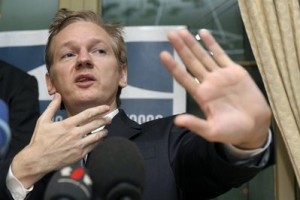 WikiLeaks founder Julian Assange surrendered to London police on Tuesday as part of a Swedish sex-crimes investigation, the latest blow to an organization that faces legal, financial and technological challenges after releasing hundreds of secret U.S. diplomatic cables.

Assange was due at Westminster Magistrate’s Court later Tuesday.

WikiLeaks’ disclosure of key sites that the U.S. has deemed critical to national security marks an increasingly dangerous step by the online organization, whose actions are at the center of a broad criminal investigation, U.S. officials and some security analysts said Monday.

The list of power suppliers, dams, chemical manufacturers, transportation systems and communication grids spans the globe from Africa to Mexico and is part of a cache of classified State Department documents released by WikiLeaks.

“It is a map for terrorists, plain and simple,” said Tom Kean, a co-chairman of the 9/11 Commission.

Although many of the sensitive sites — which include key suppliers of vaccines and other medicines — are well-known, Kean said the fact that they are listed as important to the U.S. gives enemies valuable intelligence. “It’s one thing for a group to sit around and make a list of things that might be important to the U.S.,” he said. “It’s another thing to have the list that was developed by the U.S. government.”

Randall Larsen, former executive director of the congressional Commission on the Prevention of Weapons of Mass Destruction Proliferation and Terrorism, said the list’s publication would make WikiLeaks founder Julian Assange an enemy of the world: “Every nation in the world is soon going to realize what an enemy this guy is. He just published the target list.”

Assange, wanted by Swedish authorities in connection with a rape investigation, was negotiating with British authorities Monday about the Swedish arrest warrant, the Associated Press reported.

Among sites in the State Department document: the “world’s largest integrated chemical complex” in Germany and a Canadian power supplier that is an “irreplaceable source of power to portions of the northeast U.S.”

The list of sensitive foreign sites was compiled as part of the U.S. government’s National Infrastructure Protection Plan, the State Department cable says. The plan also required the Department of Homeland Security (DHS) to develop a list of U.S. sites, though those are not among the documents released.

The foreign list represents sites and installations that, “if destroyed, disrupted or exploited, would likely have an immediate and deleterious effect on the United States,” according to the State Department document.

Stewart Baker, a former DHS policy chief in the George W. Bush administration, said terrorists would do some damage if they hit most sites on the list, but the U.S. likely would recover quickly. “So they blow up a gas pipeline and the price of gas goes up a little and other mechanisms for getting gas to market are brought to bear,” he said. “A profound effect on the United States strikes me as remote.” Attacks on the sites listed would produce “very little in the way of horror or death, so I’m not convinced this is somehow revealing the crown jewels or somehow making the United States less safe,” Baker said.

U.S. officials denounced the disclosures and did not dispute authenticity of the document.

“The national security of the United States has been put at risk,” Attorney General Eric Holder said. “The American people, themselves, have been put at risk by these actions that I believe are arrogant, misguided and ultimately not helpful in any way.”

Holder said the criminal investigation into the breach of classified information has intensified. The attorney general said he intervened in the inquiry last week by authorizing “a number” of actions to advance the investigation. He declined to elaborate other than to indicate that the inquiry ranged more broadly than a narrow espionage investigation.

Homeland Secretary Janet Napolitano said the disclosure could jeopardize individuals and organizations. “I cannot tell you how strongly I condemn this action,” she said. USA today