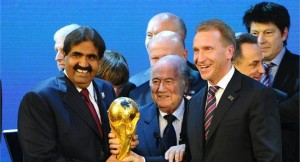 Russia and Qatar will make their debuts as World Cup hosts after FIFA’s 22-member panel voted to award the nations the 2018 and 2022 finals respectively.

Russia beat competition from England, Netherlands/Belgium and Spain/Portugal. Deputy prime minister Igor Shuvalov celebrated by saying: “You have entrusted us with the FIFA World Cup for 2018 and I can promise, we all can promise, you will never regret it. Let us make history together.”

Qatar has been awarded the 2022 World Cup finals after seeing off challenges from Australia, Japan, South Korea and the USA – taking the tournament to the Middle East for the first time.

The FIFA executive committee’s decision comes as a slight surprise after the USA and Australia bids had been highly-fancied.

Qatar’s staging of the tournament had come in for some criticism because of the weather in the country during June and July – temperatures can rise as high as 50 degrees Celsius – while the close proximity of the stadiums had also raised some questions.

England’s bid to host the 2018 finals, which may have suffered from a backlash against corruption investigations into FIFA members by BBC Panorama and the Sunday Times in the last two months, secured just two votes and was knocked out in the first round.

England won only one other vote apart from Britain’s FIFA vice-president Geoff Thompson. In the first round Holland/Belgium secured four, Spain/Portugal seven and Russia nine. Thompson, formerly the FA chairman for eight years, said promises to England had been broken.

“I cannot believe what has happened, and I am naturally very, very disappointed,” he said. “The votes that were promised clearly didn’t materialise. I never imagined we would go out in the first round.”

England’s defeat came despite an impressive presentation that was described by Blatter as “excellent and remarkable”.

Russia eventually won the right to host the 2018 tournament with an outright majority in the second round of voting. In the 2022 contest, Qatar beat the USA in the third and final round of voting.

David Beckham, a prominent member of England’s bid team as well as a former national team captain, said: “I think the bid team have done everything possible. We couldn’t have got a better bid. We’re disappointed but we wish Qatar and Russia the very best. They’re two great countries and I’m sure they’ll make FIFA very proud.”

The Spanish football federation (RFEF), which had tabled a joint bid for the 2018 World Cup with Portugal, offered its best wishes to Russia and Qatar.

“The Spanish football federation wishes to extent its most sincere congratulations to the football federations of Russia and Qatar after being chosen to organise the 2018 and 2022 World Cups, respectively,” the RFEF said in a statement.

The head of the U.S. World Cup bid team admitted defeat to Qatar was “very difficult to take”. The North American nation had been considered a front-runner to host the finals in 12 years’ time.

US Soccer president Sunil Gulati said: “There’s no way around it: I am disappointed.” But he added: “Even though our bid did not win, the future of soccer is bright in the United States.”