Lebanon PM: The cabinet will convene as soon I return 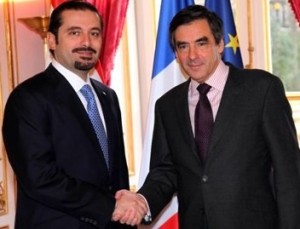 Lebanese Prime Minister Saad Hariri said on Thursday following his talks with his French counterpart that the Cabinet will convene as soon as he returns to Lebanon from his trip to France.

The talks according to Hariri covered the situation in Lebanon , Israeli threats, bilateral relations between the two countries, and ways of enhancing them in various fields, as well as the Special Tribunal for Lebanon (STL) .

In reference to the Saudi Syrian efforts to resolve the impasse over the upcoming STL indictment Hariri said: ” We are committed to the Saudi-Syrian path, and this path should be given time to reach results.”

Asked about accusations by the March 8 alliance that he is wasting time, Hariri responded: “I am not wasting time, but I consider that the others, who accuse me of wasting time, are the ones who should do something. They know themselves, and they haven’t done what they have to do.”

“Hariri has a special responsibility in this regards and knows what is required of him to put an end to accusations against Hezbollah. “Hezbollah is not asking Prime Minister Hariri to talk about this issue but to taken action with the concerned parties ”

“We have every intention to reach an understanding through dialogue and calm, I said it before and I repeat it again , the high tone in Lebanon does not work. He praised President Michel Suleiman’s initiative and described it as “good ” .

France is still supporting the tribunal, Hariri said, adding that “through French, Saudi and Syrian support, Lebanon will overcome the current impasse .”

Hariri arrived in Paris on Tuesday for an official visit and met with French President Nicolas Sarkozy that afternoon. On Thursday, he met with the French PM for lunch.