Gemayel: We want justice for the sake of justice 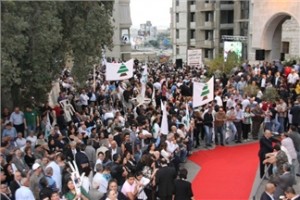 Former Lebanese president and Phalange Party leader Amin Gemayel said on Sunday during a mass which was held to commemorate the fourth anniversary of the assassination of his son , former Industry Minister Pierre Gemayel : “We don’t need another national charter, or another Taif Accord or Doha Agreement, but all we need a verdict on who killed our martyrs.”

All initiatives are welcome , whether Arab or international after a verdict is issued, Gemayel added.

“This is our right and we will not back down from building the state no matter what obstacles face us . The clock’s hands will not turn back. We will not accept any settlement at the expense of our martyrs’ blood.”

“They thought they would harm the party by assassinating Pierre , but the Phalange will stay,” Gemayel added.

Pierre Gemayel was assassinated in 2006.

Some leaders are concerned that should the court indict Hezbollah members, it could lead to a Shiite-Sunni strife, others aren’t as worried and see this as a desperate attempt by Hezbollah to intimidate and scare the Lebanese and specially PM Saad Hariri .

The Pro Syrian Al Akhbar newspaper reported last week that Hezbollah has prepared a plan to take over Lebanon when STL issues its indictment for the 2005 murder of former Prime Minister Rafik Hariri.

Another FPM member MP Alain Aoun said on Saturday that the Lebanese must “have reservations about any decision issued by the Special Tribunal for Lebanon (STL).”

The MP told Sawt al-Mada radio station that the tribunal was not established in accordance with the Lebanese constitution.