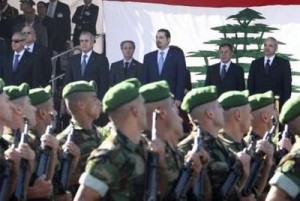 Sovereignty and independence, you cannot have one without the other. These two ideas form the basis upon which states are formed.  Unfortunately there is no international standard that requires a state to demonstrate that it meets the prerequisites of statehood if it wishes international recognition and if it wishes to be entitled to the privileges that accrue with such recognition.

Lebanon, within its current borders, was created by the French mandate in 1926 and was ultimately declared an independent nation on November 22, 1943 upon the release of the Lebanese detainees from Rashia. Yes Lebanon is 67 years young today and deserves to recognize this day if for nothing else but managing to survive through the past 67 tumultuous years. But survive is barely what it has done.

Right from the first moment of its inception as an independent state Lebanon found a way to institutionalize, implicitly, its sectarianian structure. What looked at the time as a wise and accommodative decision on the part of the President and Beshara Al Khoury and the PM Riad Al Solh has evolved to be a great historical error that has prevented Lebanon from ever attaining any of its potential. It is a sad occasion indeed when a country celebrates its 67th anniversary of independence while it has no independence, no sovereignty and no state to show for its efforts.

Where have the last 67 years gone? They have been wasted in squabbles, conflicts, civil wars and in paying fealty to political feudal lords and religious leaders. Lebanon has spent every second of its existence so far trying to maintain the illusion that there is a state when in reality what we have become is nothing more than a sectarian federation of residents with no allegiances to a state.

Lebanon has failed to grow the idea of citizenship among its residents who are willing and anxious to do the bidding of any state as long as it is not Lebanese under the mistaken and deadly rationale of sectarian balance. Yes we have managed to keep a sectarian balance of sorts but we have failed to create a state. “No one can serve two masters. Either he will hate the one and love the other, or he will be devoted to the one and despise the other.”  You cannot devote your life to the promotion of a sect at the expense of the state. Religion, faith, sectarian wellbeing should be a private affair and must never be allowed to dictate national policy. When we let that happen, which is exactly what we have done for 67 years, then we become what we are, a nation of pretenders.  We pretend to be free, we pretend to be independent, we pretend to be sovereign we pretend to have a state.

All is not lost. We can still redeem ourselves but our first act must be to take an oath of allegiance to an idea, to freedom, democracy, human rights and total unquestioning allegiance to a state that is not based on sectarian principles and discriminatory practices. We can still actualize our dream of establishing a state worthy of the name but in order to do that we have no choice but to relegate religious leaders to their spiritual roles only. We have to forge an identity that is not primarily defined by our religious faith but by our civil rights. We have to shout it from the roof tops that the emperor has no clothes.

If we are to save the Lebanese experiment then we have no choice but to establish the power of the state all over the land and to elect the best and the brightest to positions of power no matter what god they pray to or even whether they pray at all. The last thing that we need to hear tomorrow (today) is an empty rhetoric from a president who was unconstitutionally elected praising accommodations with a party that acts as a state within a state and whose major concern is the appeasement of our neighbourly dictator or land or absolute monarch.

The Lebanese experiment has is still alive after 67 years but barely so. We are on life support, in all fields. Unless we come back to our senses in order to renounce all the traditional leaders and reject sectarianism then we should not complain once this essentially noble experiment comes crashing down.  It is not too late to save the day but such drastic action requires more than wishful thinking. Are we up to it? Time will tell but don’t forget that time is running out.