Israel demotes 2 soldiers who used Gaza child as a shield 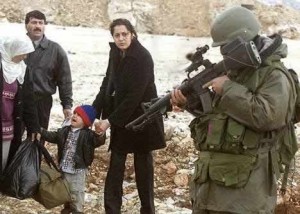 An Israeli military court demoted two soldiers and gave them suspended sentences for forcing a 9- year-old Palestinian boy in the Gaza Strip to open bags that they suspected contained explosives.

The two infantry staff sergeants, who were not identified by name, were found guilty Oct. 3 of “exceeding authority to the point of endangering life and health” and “unsuitable conduct.” They were both sentenced thttps://yalibnan.com/wp-admin/media-upload.php?post_id=15173&type=image&TB_iframe=trueoday to suspended terms of three months and demoted to the rank of sergeant, according to an army spokesman who spoke on condition of anonymity in line with military regulations.

The incident occurred Jan. 15, 2009, toward the end of Israel’s three-week military operation in Gaza that it said was meant to stop Hamas and other militant Palestinian groups from firing missiles into Israeli territory. A United Nations panel led by South African judge Richard Goldstone accused Israel and Hamas of committing war crimes during the Gaza conflict.

The two soldiers were searching a basement apartment with 20 people inside and ordered the boy to open two bags they suspected of being booby-trapped, according to court papers. When he couldn’t open the second bag, one of the soldiers fired at it while the boy stood nearby, the court said. No explosives were found.

“Under the laws of war, using civilians as human shields is a war crime,” Bill Van Esveld, an Israel-based researcher for Human Rights Watch, said in a phone interview. “It is hard to see how a demotion and a short suspended sentence are adequate to the gravity of that offense.”

Israeli military law forbids soldiers from using civilians to open bags suspected of containing explosives, the court said in its ruling. “Even more so was it forbidden for them to use a child to open the bag,” it said.

More than 1,100 Palestinians and 13 Israelis were killed in the Gaza conflict. Gaza is run by Hamas, the Islamic movement that is considered a terrorist organization by Israel, the U.S. and the European Union. Hamas seized full control of Gaza in 2007, ending a power-sharing arrangement with the Fatah party of Palestinian Authority President Mahmoud Abbas, after winning parliamentary elections the previous year.

Israel, which rejected the findings of the Goldstone panel, says its operations in Gaza were a defensive response to eight years of rocket attacks from Hamas and other militant groups that killed 24 Israelis. The army said at least 3,000 rockets and mortars were fired into Israel from Gaza in 2008, with more than 480 since the war ended with a cease-fire on Jan. 18, 2009.

Hamas’s charter calls for the destruction of the Jewish state. The group’s leaders say they will renounce violence when Israel withdraws from territory occupied in 1967 and allows Palestinians to return to areas in Israel from which they fled in 1948. Bloomberg