Protests: Who is listening?

by yalibnan
584
By Diana Nemeh​​​​​​​​ I am constantly hearing about people taking to the streets to protest and it makes me wonder who is listening?
Share: 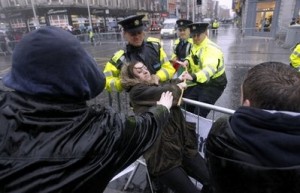 I participated in my first protest through the streets of Manhattan on February 15, 2003 to stop the U. S. invasion of Iraq; after walking for hours and hearing that 10 million people around the world had joined in a global demonstration, I felt confident that a significant impact was made and our voices were heard.  However, a few weeks later George W. Bush had launched the invasion into Iraq for a highly controversial war that is still being fought today, in one way or another.  The defeat and disappointment I felt at that moment knowing that our efforts went to waste was indescribable and from then on I began to lose hope in the effect of protests.  Yet till this day I am constantly hearing about people taking to the streets to protest and it makes me wonder who is listening?

The most recent protest to make the news is the French against President Nicolas Sarkozy’s plan to raise the retirement age from 60 to 62.  The government believes the changes in pension are necessary to help France balance the budget of the pension systems by 2018 and it will also help them deal with an aging population.  However, over one million protestors a day felt differently saying that raising the retirement age will put more workers in the market, thus lowering wages.  The rallies, protests, fuel blockades and strikes have cost the country up to $560 million a day, yet the bill’s planned enactment is still set for November 15.  So other than crippling the country and having their voices heard around the world, it seems the only other thing to be affected from this protest is Sarkozy’s popularity rating that will reflect in 2012 when the French people may perhaps put him in retirement since he is due to face re-election.  Although the French protestors may somewhat be facing defeat with this issue, it will not be the last time they take to the streets since France is known to have a culture of protests dating back to May 1968 during the largest general strike that almost froze their economy.  Their protests may not always bring the specific changes they are calling on but for the French, this may be the best way to express their opinions.

Other than using protesting as a method to express opinions, despite the possibility of an immediate outcome for the protestors, some protests have brought worldwide visibility to an issue.  The most recent case in point was in Iran during the 2009 disputed presidential re-election of Mahmoud Ahmadinejad.  Ignoring a ban on street marches from the Iranian government, millions of people flooded the streets of Tehran to protest against the voting results they considered fraudulent. The people of Iran did not only limit themselves to the streets, they communicated their protests through Twitter and other social networking sites that helped express their views to thousands of people.  The demonstrations from the people of Iran has brought many other issues to the surface for the rest of the world to see and their unity with a common goal in mind has perhaps started a revolutionary shift to break them free from the 30 year hold of the Islamic Republic by weakening the legitimacy of the regime.

The protests recently held in France expressed opinions and the 2009 protests held in Iran expressed opinions that could possibly be the start of the turning point for Iran one day.  However, there is one particular protest that allowed for an expression of opinion which led to immediate change right here in Lebanon, labeled as the Cedar Revolution in 2005, which was initiated from the assassination of former Prime Minister Rafiq Hariri on February 14, 2005.  One of the largest demonstrations Lebanon has ever held, over 1 million people turned out and peacefully protested to end the Syrian occupation and influence of Lebanon and Lebanon’s government since 1976.  Following this demonstration, the Syrians completely withdrew their 14,000 troops and the Pro-Syrian government was decommissioned. Many other goals were accomplished through the Cedar Revolution but mainly it united all Lebanese for their conquest of freedom and independence.  Every February 14 since then, over 1 million supporters gather together in Beirut to mark the anniversary of Hariri’s assassination.

Therefore, in some instances, the right people are listening and the ability to protest, whether effective or not, should be a given innate right for all in order to express opinion, bring visibility to a cause, and show power in unity.  Some protests may not immediately change minds but they do bring hidden concerns into light and they allow for us to voice our relative grievances to each other and whoever else may be listening.  Regardless of the outcome doubt should never be placed on the power of protests.