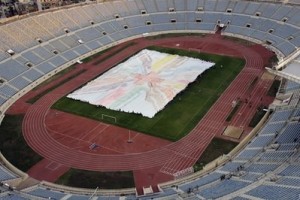 A 4,600-square-meter painted canvas was assembled at the Cite Sportive stadium in Beirut Sunday, breaking the Guinness world record for the largest handprint painting.

The aim was to promote humanitarian values and solidarity. The project was dubbed “Idak Maana,” Arabic for “give us a hand.”

The former holder of the world’s largest handprint painting was China, with a 3,715.86-square-meter canvas encouraging youths to combat drugs.

The LRC painting received a certificate from representatives of the Guinness book for world records as the new largest handprint painting in the world.

LRC vice president Walid Kibbi stressed the objective was not simply to enter the Guinness book of records but to involve the Lebanese society and its youth in an activity that served LRC principles.

“We offer this achievement to peace-loving people and to Lebanon,” Kibbi said during the ceremony.

The initiative, which sought to promote humanitarian values such as solidarity, assistance, mutual respect, acceptance, tolerance, non-violence and eliminating discrimination, was achieved over two phases.

Over the weekend, eight pieces of fabric measuring over 80 meters in length and 6 meters in width were distributed to Lebanon’s various districts.

Thousands of students from Lebanese private and public schools imprinted their hands on the cloth, along with members of civil-society organizations and disabled citizens. Disabled Palestinian refugees from the Ghassan Kanafi organization in the Ain al-Hilweh camp also took part.

The pieces were put together Sunday at the Cite Sportive Stadium and received the title of largest handprint painting. The final masterpiece was photographed from the air using a Lebanese Army helicopter.

Lebanon already holds many world records including the biggest serving of tabbouleh, the largest flag and the biggest bowl of hummus.

During preparations at the Evangelical Art School in Sidon, LRC activists explained that each person was allowed to print their hand more than once on the fabric, noting that more than 6,000 students from Sidon participated in the event.

“The activity is being held to emphasize the goals of the LRC, which are to spread humanitarian values and standards,” said the project’s coordinator in Sidon Amina Khalil.

LRC supporters gathered in several centers across Lebanon during the weekend to prepare for the record breaking achievement: Hasbaya, and Sidon in south Lebanon; Tripoli in north Lebanon; Zahle in the Bekaa; Jounieh, Aley, Furn al-Sebbak in Mount Lebanon; and Beirut.

LRC’s coordinator in north Lebanon, Elias Doumit, said that the event was an invitation for everyone to take on board the principles of the LRC and to reject violence.

Volunteers were informed of the initiative as part of a LRC campaign launched last June in the aim of encouraging non-violence, respect and acceptance.

“We want to spread Red Cross values in Lebanon. Anyone who agrees with us leaves his handprint on the painting” said LRC activist Nadim Hitti.

LRC’s coordinator in Jounieh, Alain Sarkis, agreed with Hitti, adding that the project was a message to the entire world that Lebanon was a peace-loving country.