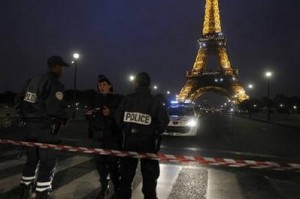 Saudi Arabia has warned France it is the target of an imminent al-Qaeda attack, French Interior Minister Brice Hortefeux has said.

He said Saudi intelligence agencies spoke of a threat to Europe, and “France in particular”, from Al-Qaeda in the Arabian Peninsula.

France is already on high alert following warnings of possible attacks aimed at France, Germany and the UK.

The Eiffel Tower was evacuated twice in September over security alerts.

“I can tell you – and it’s not information that’s been made public yet – that even a few hours, a few days ago, [we received] a new message, from the Saudi [intelligence] services, indicating to us that Al-Qaeda on the Arabian Peninsula was certainly active, or expecting to be active,” Mr Hortefeux said in a joint radio and television interview.

He said the threat concerned “the European continent and France in particular”.

Mr Hortefeux gave little detail about the information the Saudis had provided, but said the threat was real.

It appears to have been released by the government as a warning to the French public that they must remain vigilant, says the BBC’s Christian Fraser in Paris.

The authorities have been criticised for scaremongering, our correspondent says. The the official threat level in France remains one below the highest level of scarlet.

The Saudi warning is the latest to put French security forces, and those of other European countries, on heightened alert.

Word of a plot threatening France, the UK and Germany emerged last month.

That plot was said to be linked to al-Qaeda and involved European militants training in Pakistan who were preparing to mount a Mumbai-style attack on the three countries.

Ten gunmen attacked targets in the Indian city of Mumbai in 2008, killing 166 people in a three-day rampage.

Increased drone missile attacks in the tribal regions of Pakistan bordering Afghanistan were said by officials to be an attempt to disrupt the plot.

Earlier in October, France warned its citizens travelling to Britain to be “extremely vigilant” amid fears of a possible attack.

A few days previously, Britain had raised its alert level from general to high for travellers to Germany and France. BBC