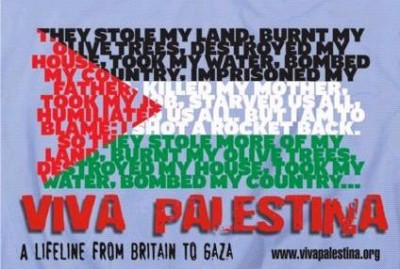 A Gaza humanitarian convoy that includes passengers who survived a previous fatal flotilla incident has been delayed and is expected to set sail Monday in an attempt to deliver aid for Palestinians, organizers said.

Originally slated to depart on Sunday, last-minute complications over entry requirements by Egyptian authorities, caused a delay, organizers said. They hope to quickly resolve the issues and have the convoy on its way by Monday morning, the group said.

According to RIA Novosti the departure was delayed after Egyptian authorities declared persona non-grata its organizer, former British MP George Galloway. Other 16 activists have also been banned from entering the country. Galloway was banned from entering Egypt after a series of rallies were organized by the Gaza Freedom movement in March, despite Egypt’s ban on public protests.

The Viva Palestina convoy, hailed by organizers as the largest convoy to break the Gaza embargo, has already traveled 4,828 kilometers (3,000 miles) by road from England. It is now waiting to depart from the Syrian port of Latakia to Al-Arish, Egypt.

It has been joined by convoys from Morocco, Algeria, Jordan and Persian Gulf nations, organizers said Saturday. Two of the ships are slated to pass through the point at which Israeli troops boarded the Mavi Marmara in May (Freedom Flotilla).

Israeli troops used force on the activists, leaving eight Turks and one U.S.-Turkish dual citizen dead. Israel says its troops were attacked by those on board, but passengers on the boat insisted they were fired on without provocation.

Among those on board the Viva Palestina convoy are 40 of the passengers on the Mavi Marmara. Viva Palestina organizers have planned a commemoration service at that location and will lay flowers on the water.

The main ship in the Viva Palestina convoy, carrying 380 activists from 42 countries, 147 vehicles and $5 million in medical aid, has been docked at the Syrian port for the last 12 days. It was given the green light to sail to Egypt after lengthy mediation with Egyptian and Syrian authorities.

The Israeli military stormed the Freedom Flotilla ships in neutral waters in the Mediterranean Sea in late May as they tried to take 10,000 tons of aid to the Gaza Strip, which has been under an Israeli blockade for the past three years. The raid claimed the lives of at least nine activists, including eight Turkish nationals.