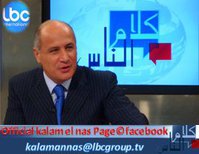 “We at Hezbollah categorically condemn the ugly act of incitement as perpetrated byLBC, and we deem it to be a contribution and intentional propagation of sedition in Lebanon by the administration of this television station, particularly between Shiite and Sunni Muslims. We also regard it as an abuse of public freedom in Lebanon. ”

Hezbollah called on the” Lebanese judiciary and relevant authorities including the Ministry of Information and the National Media Council to act responsibly in front of this real media crime that was committed last Thursday, and repeated again through a rerun of the episode, thus showing that the television station’s deed was premeditated,” the statement concluded.

In a statement the group said that the episode encouraged the resorting to arms and deliberately tarnished the history and current reality of the northern city of Tripoli.

Daher said he understood the reactions and voiced his readiness to shorten the airing period of the upcoming “Kalam An-Nas” episodes, tackling the same topic.

Ghanem hosted a group of youth from the Alawite, Sunni, Shiite and Christian communities and asked questions such as: “Will you face Hezbollah if it decided to react using arms over the indictment?”

He also aired testimonies of victims of clashes between pro-government and Hezbollah gunmen in May 2008.