by yalibnan
873
By Diana Nemeh How dirty is your laundry? Maybe I should ask your maid and quite possibly she will air out information dirtier than your clothes.
Share: 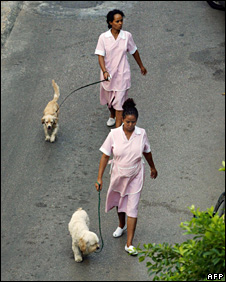 How dirty is your laundry? Maybe I should ask your maid and quite possibly she will air out information dirtier than your clothes. Yes, I am referring to the treatment these workers are subjected to that reminds me of history class in the United States when I used to read about slavery.

Lebanon has justified modern-day slavery with contracts and cultural prejudice. These workers are bought and sold, their passports confiscated, wages withheld, worked from 6 am until midnight, denied food and exploited mentally, physically and sexually. Yet when you have visitors over, you tell them she is like your sister. The mentality in Lebanese society, most likely worse in other societies within the GCC and Levant region, is that these people are simply a piece of property and you the owner.

It’s no wonder the Philippines has banned the exportation of workers to Lebanon because its citizens have no protection here. In 2009, migrant domestic workers were granted some basic rights, such as one day off a week. However many are unaware of this, or simply not allowed to take it. They are contracted with no clauses about maximum working hours, minimum wages and vacations; this gives the owner no limits and no repercussions.

Even guiltier than the owners is the Lebanese government, for favoritism toward the Lebanese employer by not implementing rules to protect or defend these foreign workers, similar to the way Israel is lenient to its soldiers versus Palestinians. But we cannot blame the government for the poor labor regulations, or anything for that matter, because they are too busy doing nothing about other issues affecting us (electricity, water shortages, traffic, preserving heritage, pollution, corruption, Palestinian refugees, to name a few). They are busy fighting an endless battle of intimidating words with each other while Israel and other countries sit back and laugh since the Lebanese government is basically doing their dirty work for them. Perhaps in some weird twist of irony, Lebanon is the maid. How can we expect to get along with anyone else when we cannot even get along with ourselves? That’s another article.

Foreign governments have encouraged the export of domestic workers to our countries since it is the largest source of foreign revenue for their country. Lebanon has an estimated 200,000 migrant workers; not all are here legally. Their earnings amount to billions of dollars sent home annually and that is exactly why they are here: to do a job, to make money and to send it back to their families. They leave their husbands and children in the hope of making a better life for them with a relatively higher salary here. They expect to do the work, have breaks, maybe get a day off and get paid for it. These are the same standards we expect every day when most of us go to the office. They are not here to clean your two-bedroom apartment from 6 am to midnight because it never seems to be clean enough for you. They are not here to wait on their salary when it is convenient for you to pay. They may make mistakes but that does not give you the right to beat them or take your frustrations out on them.

The inhumane treatment of these workers and slow response from the government, Parliament, General Security, ministries of Labor, Interior and Justice is leading to your maids running away or worse falling from balconies, conveniently labeled as suicides. Why does it have to get to this point? They agreed to come here to do a job and get paid for it, therefore you should hold your end of the deal and pay them for the job they do, withholding the abuse, not the wages. If nobody can do the job better than you, maybe you should do it yourself.