MP Sakr: Beirut airport was occupied by an outlaw 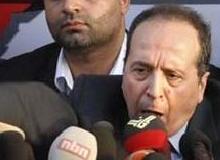 “There is no indictment before Mhelis, Rifi and Mirza are tried,” he warned from Beirut airport.

Sayyed said during a press conference he held at the airport after returning from Paris: “False witnesses were recognized by PM Saad Hariri and we demand that they be held accountable under the law.”

“If false witnesses are not held accountable under the law, we shall settle the score against them in the street,” he warned.

“I place myself at the disposal of the Lebanese judiciary, but not at Mirza’s disposal,” Sayyed stressed.

On Friday, Sayyed requested that the Court of Cassation remove Mirza, Rifi and Brig. Gen. Wissam al-Hasan from their posts.

Sayyed said he wants Mirza removed “due to the personal rivalry” between them.

As for Rifi and Hasan, Sayyed said he wants them removed because both men work as “law enforcers under Mirza.”

At the airport, Sayyed said Sunnis should realize that they “exploited” Rafik Hariri’s death to fight Syria and the Resistance.

He denied that the Opposition was preparing to wage a coup against the Lebanon regime.

“There is no coup or confrontations. But there are protests to support the State, the law and the true justice because there is no justice until the false witnesses are brought to justice,” he said.

Turning to Hariri, he warned: “Sheikh Saad, this issue will not come to an end until the criminals around you and held accountable.”

Earlier today Hezbollah MP Hassan Fadlallah told New TV that “no one is capable of putting Sayyed in prison.”

“Sayyed has the right to live with dignity after the unjust political decision [to imprison him],” Fadlallah said, adding that Hezbollah wants the Lebanese judiciary to be fair and transparent.

“The Lebanese judiciary should penalize the witnesses who gave false testimony [to the international commission investigating the 2005 Hariri assassination],” Fadlallah added.

MP Okab Sakr told VOL following the arrival of Sayyed at the airport: “Beirut airport was occupied by an outlaw under the protection of groups of outlaws.”

He described Hezbollah’s support for Maj. Gen. Jamil Sayyed as a “symbol of fragmenting the state.”

Sayyed is a wanted man in Lebanon. Attorney General Judge Said Mirza demanded on Thursday summoning Sayyed for threatening State security and Prime Minister Saad Hariri. According to observers Hezbollah’s reception for Sayyed will be viewed as a direct challenge to the the Lebanese authorities ( specially the judiciary and the Internal Security Forces) and if it succeeds ( in its confrontation) it will be viewed as the end to Lebanon’s sovereignty.