Ad-Diyar newspaper reported on Tuesday that Free Patriotic Movement leader MP Michel Aoun criticized President Michel Suleiman because of the former’s frustration that Suleiman presided over a reconciliation meeting in the Chouf village of Brih between Druze residents and Christian returnees on August 28. 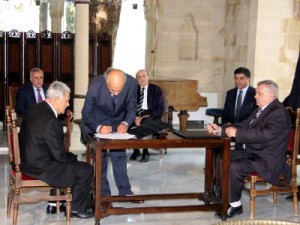 The daily added that Aoun expected Progressive Socialist Party leader MP Walid Jumblatt, who attended the reconciliation meeting, to allow him to be involved in the issue in order for him take the credit for it.

Brih was one of the very few villages in the Chouf where Christians and Druze had not yet reconciled.