Two crew members aboard an American ( United Parcel Services) UPS cargo plane are believed to have been killed after the aircraft crashed in Dubai today. 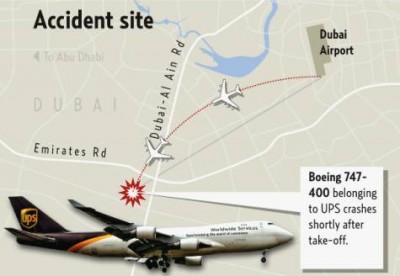 According to a United Arab Emirates official who appeared on local television station al-Arabiya, the plane was attempting to land at Dubai International Airport when it crashed due to technical problems. Witnesses reported seeing the aircraft setting fire to vehicles as it crashed and going up in a fireball. Some witnesses told Al-Jazeera that they had seen a fire on the aircraft before it crashed.

UPS spokeswoman Kristen Petrella said the Boeing 747-400 went down at about 8pm and was en route to the UPS hub in Cologne, Germany. Although the company has not officially confirmed casualties, it said two crew members were on board. “This incident is very unfortunate and we will do everything we can to find the cause. Our thoughts go out to the crew members involved in the incident and their families,” UPS said in a statement.

Although local reports said the plane had come down near a busy highway intersection south-east of the airport, posters on the Professional Pilots Rumour Network (PPRN) suggest the aircraft went down near an area known as Silicon Oasis. The state news agency, Wam, reported the crash in an unpopulated desert area.

One poster on the PPRN said: “Just five minutes ago. I heard and saw an aircraft, possibly an airliner going down in Dubai near Silicon Oasis. It has just over-flown my house and [there was] a big fireball.”UPS, a courier company based in US city of Atlanta, confirmed in a statement that one of its cargo planes had been involved in an accident in Dubai and said it was working to obtain more details.MrMachfivepointfive wrote on PPRN: “UPS. Declared Mayday. Was on approach 30L and then veered off course. Last radar hit showed descending through 500′ doing 250kts.”

In October 2009, a Sudanese Boeing 707 cargo plane crashed in the desert outside Dubai, killing six crew members. Emirati regulators have since banned Azza Transport, the plane’s Sudanese owner, from operating in the country.Guardian