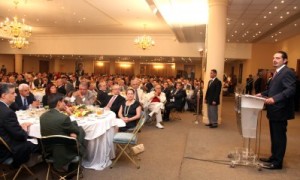 During an Iftar in honor of Beiruti families, Lebanese Prime Minister Saad Hariri called for less talk and more action and vowed to never abandon his allies that stood by him all this time .

“We will continue in his footsteps and will never abandon our commitment to the historic role of the Capital,” Hariri said

“We will serve Beirut and its people, from our position as representatives of the Capital in the Parliament, our position as head of the Future Movement as well as the son of Rafik Hariri,” he told guests in Qoreitem.

“Words will not cancel the truth, and whatever these campaigns and the words of threat increase they will not be able to stop the path of justice,” Hariri stressed.

His comment about threats may be in reference to Wiam Wahhab’s statement on August 15 when he attacked the Special Tribunal for Lebanon and said ” people supporting sedition in Lebanon will be later found inside car trunks.”

“Today, we are facing big challenges … Don’t you think that the Lebanese citizen is suffering the most from the electricity problem? This means that the solution would be by talking to each other and not by burning tires. There are several issues that should be tackled and this government is the government of the people’s priorities. These priorities are electricity, water, roads, traffic congestion, medication, agriculture, and others.

He called for less talk and more action “in order to achieve success.”

Hariri paid tribute to slain Bashir Gemayel on the day that marked his election as president of the republic and saluted Solange Gemayel ( Gemayel’s widow ) who attended the iftar. aririHariri said ” we will always remain loyal to our allies who stood with us during all this period, especially the Phalange Party which witnessed the martyrdom of many of its members, particularly Pierre Amin Gemayel who was a brother and a friend to me,” Hariri concluded.