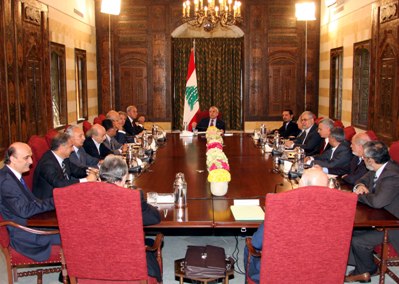 A national dialogue session aimed at discussing the defense strategy kicked off at the summer presidential palace in Beiteddine , el Shouf of Mt Lebanon.

Defense Minister Elias al-Murr did not attend to health reasons. Also FPM leader Michel Aoun did not attend, but no reasons were given for his absence.

Next sessions is October 19

The national dialogue session to address the national defense strategy in Beiteddine Palace adjourned on Thursday, and committee members scheduled the next meeting for October 19, according to local reports.

According to a statement issued by the LF’s media office Geagea proposed full Lebanese Armed Forces’ (LAF) deployment in the South and to place Hezbollah units under the Lebanese army’s control.

The participants agreed Thursday to continue discussions on the national defense strategy in light of the Adaisseh border skirmish and the need to better arm the Lebanese army.

Free Patriotic Movement leader MP Michel Aoun called President Michel Suleiman on Thursday morning to inform him that he would be absent from the national dialogue session due to health reasons, MTV reported, without elaborating further.