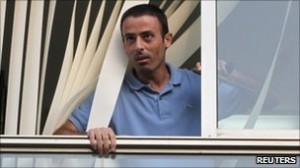 A man who broke into the Turkish embassy in the Israeli city of Tel Aviv has been arrested and taken to hospital with gunshot wounds.

The man had taken two hostages but they were later freed. Officials said he was shot by embassy security guards.

Israel’s foreign ministry identified the man as a Palestinian who stormed the UK embassy in Tel Aviv in 2006.

There are reports that the man, named as Nadim Injaz from the West Bank, was demanding asylum in Turkey.

Turkish Foreign Minister Ahmet Davutoglu said the situation at the embassy was under control and all staff were safe.

“A man who claimed he was Palestinian came to the embassy and wanted asylum. He was reportedly armed. He was overpowered,” he said.

“He is also in good health at the moment. He said that he was seeking asylum but we are evaluating the whole incident. An investigation is under way but there is nothing to worry about.”

Television images showed Mr Injaz limping as he was led out of the building by police. He was then put onto a stretcher and taken away in an ambulance.

Earlier images showed Israeli police and ambulances outside the embassy building, on Hayarkon Street, near the busy beachfront. Police and heavily armed security personnel could also be seen.

Mr Davutoglu had said the assailant was carrying a knife, a can of petrol and a toy gun, when he forced his way into the embassy compound on Tuesday evening.

He later retreated to an upper floor of the embassy after being shot and freeing his hostages – thought to be the consul-general and his wife.

A man identified as Mr Injaz was later photographed looking out of one of the building’s windows.

Israel’s Channel 2 television also played a recording of a man it claimed was the attacker, who threatened to burn down the embassy if he was not allowed to leave the country.

Mr Injaz is from the West Bank town of Ramallah and is reported to have a history of mental illness. He has claimed he used to work for Israeli intelligence and is being persecuted by them.

In 2006, he stormed the British embassy in Tel Aviv and tried to demand asylum.

Correspondents say Tuesday’s incident appears to be unrelated to a recent diplomatic dispute between Israel and Turkey.

Ties deteriorated after nine Turks were killed in late May in an Israeli commando raid on a flotilla of aid ships bound for the Gaza Strip.BBC