Yes, The Special Tribunal Can Accomodate Both Sides.

by Ghassan Karam
653
By Ghassan Karam It has been obvious for a while that the case against the perpetrators in the former Prime Minister Hariri assassination lacks the proverbial “smoking gun” which is not surprising for a very well organized
Share:

It has been obvious for a while that the case against the perpetrators in the former Prime Minister Hariri assassination lacks the proverbial “smoking gun” which is not surprising for a very well organized and sophisticated operation that took place more than five years ago. Many of the news leaks however, have suggested that when the indictments by the office of the prosecutor of the Special Tribunal for Lebanon , STL, are to be issued in September that the indictments will name some Hezbollah party members on the basis of circumstantial evidence.

Hezbollah seems to take these allegations very seriously otherwise Sayed Nasrallah , its Secretary General, would not have threatened civil strife but then softened his position to suggest that he is only presenting evidence that has not been considered by the prosecutor of the STL. The bulk of the Hezbollah evidence rests is circumstantial, evidence that suggests that Israel could have organized the hit against Mr. Hariri. Mr. Nasrallah showed video of the intercepted feed from Israeli Unmanned Vehicles that criss crossed the sky of Beirut and Lebanon. This was the explicit material evidence presented by Mr. Nasrallah in addition to the important implicit evidence that he has only alluded to. Mr. Nasrallah has made it clear though that the reason for all the Hezbollah related cell phone traffic in the immediate area of the explosion on February 14, 2005 was due to the fact that Hezbollah operatives were at that stage in pursuit of Ghassan Al Jid who is an Israeli collaborator and who has managed to flee the country to Israel.  As you can see the strength of the Sayed Nasrallh presentation rested on showing a potential interest in the exact movements of the former prime minister in addition to providing a rationale for the presence of Hezbollah operatives in the immediate vicinity of the scene of the crime. 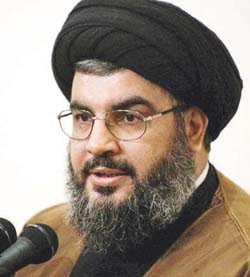 Mr. Nasrallah has the right and even the obligation to defend his party and its members against all and any accusations. No one should cast any doubts on the validity of such a claim. Defense though should be within the accepted judicial institutions and only after the indictments are made. Hezbollah and its many supporters however claim that they have earned the right for a preemptive defense, if you will, since the STL record is full of wrong accusations based on false witnesses. They thus claim that the STL is therefore politicized and is actually an “Israeli court” whose only aim is to discredit Hezbollah. That is a weak position since it fails to distinguish between the UNIIIC and the STL. Most of the complaints by Hezbollah and its allies tend to be related to the Mehlis aera of the UNIIIC and when the STL had not been created yet.

So what is to be done at this point? Should the claims by Nasrallah be totally dismissed or should they be taken into consideration. I believe that under different circumstances these accusations could be dismissed but it would be a grave error to do so under the current set of circumstances that is prevalent in Lebanon. This doe s not mean that the STL should be discredited but neither does it mean that a major proportion of Lebanese society should be allowed to feel slighted and treated unfairly.

There is an elegant solution which rests on the formation of a special Lebanese Judicial commission to study all the details that Mr. Nasrallh has voiced and then refer its conclusions to the STL. Such a move will be within the current statutes of the STL, in general and Article 4 in particular which does not preclude such investigations provided that the results of these inquiries are referred to the STL. Under such circumstances the rule of law would have been preserved, sides would have had their say, the Lebanese factions will accept the final rulings of the STL and then we will have this sordid affair behind us. What is crucial is to preserve the principal that the evidence leads to a determination and that in the field of law there is no place for deciding on an outcome first and then culling through the evidence to support that hypothesis. There is no place for reverse engineering in the judicial system.