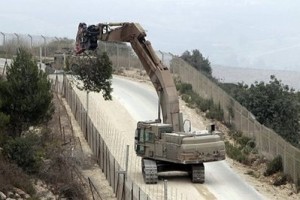 Key U.S. lawmakers are moving to block aid to the Lebanese army, citing last week’s deadly border clash between Israeli and Lebanese units and Israeli allegations that the Lebanese force has growing ties to the militant group Hezbollah.

Senior Israeli officials have sent conflicting messages about the degree to which they suspect Hezbollah’s involvement in last Tuesday’s skirmish, which left one Israeli commander and three Lebanese dead.

Israeli officials have said publicly that they don’t suspect Hezbollah’s direct involvement in the incident, but have also alleged that the Lebanese Army is increasingly infiltrated by Hezbollah sympathizers.

Israel has seized on the border incident to raise questions about growing U.S. support for the Lebanese army, and about the army’s alleged ties to Hezbollah, the Shiite political and military organization that has been Israel’s main foe in southern Lebanon and which is shunned by the U.S. as a terrorist organization.

Washington has ramped up support for the Lebanese army in recent years as a counterweight to Hezbollah and Iran, which backs the group.

Rep. Nita Lowey (D., N.Y.), the chairwoman of the House subcommittee responsible for foreign aid, placed a hold on funding that is already in the pipeline for fiscal year 2010, which totals roughly $100 million, a Democratic aide said.

“U.S. assistance is intended to enhance our security and that of our allies,” Ms. Lowey said, calling the border clash “outrageous” and “entirely avoidable.”

Ms. Lowey has yet to outline any particular steps that she wants taken before lifting her hold on the funds.

The No. 2 ranking Republican in the House, Rep. Eric Cantor of Virginia, said Congress should also block $100 million in 2011 assistance until Washington can be sure that the Lebanese army isn’t “cooperating” with Hezbollah.

“For the past few years, the U.S. and the international community looked the other way as the lines between Hezbollah and the Lebanese military and government became blurred,” Mr. Cantor said.

Hezbollah fired waves of short-range Katyusha rockets into Israel in a 34-day war that ended in August 2006, and U.S. intelligence reports say the group has fully replenished its arsenal despite U.N.-backed efforts to curb weapon shipments to the group.

In addition to arms, Iran provides about $100 million to $200 million per year to support Hezbollah, according to U.S. intelligence estimates.

Some officials say they believe that as Hezbollah’s political clout within the Lebanese government has increased in recent years, so too has its say over some appointments of commanders within the Lebanese military. It is also unlikely that a Lebanese army unit would have carried out a pre-planned border attack on Israeli soldiers without Hezbollah’s knowledge, the officials said.

“We definitely believe it was a targeted shooting, not sporadic or accidental,” an Israeli official said.

Israeli battalion commander Lt. Col. Dov Harari was killed with a single round between the eyes at a probable range of several hundred yards, according to Israeli military officials. A second officer was hit squarely in the chest and, thanks to his body armor, only wounded.

Some experts say it is unlikely a Lebanese soldier with a standard M-16 rifle would be able to make such an accurate shot from that range. Hezbollah has used trained snipers to pick off Israeli soldiers along the border.

Last week’s border clash came amid an unusual damage-control effort by Hezbollah. The group said late last month that it expected some members to be indicted in a United Nations-backed tribunal into the 2005 death of former Lebanese Prime Minister Rafik Hariri.WSJ