Nuclear Power Is Far From Optimal Choice For Arab States

by Ghassan Karam
1267
By Ghassan Karam No matter how the nuclear impasse between Iran and the international community is eventually resolved there will definitely be an unwelcome byproduct
Share:

No matter how the nuclear impasse between Iran and the international community is eventually resolved there will definitely be an unwelcome byproduct of this controversy that will affect the life of all inhabitants in the region for decades to come. Electric power generation in many of the GCC countries in addition to other Arab states is regrettably going nuclear. Many contracts have already been signed and a few others are in the discussion phase.

Iran has been at odds with the international community over what it calls its peaceful nuclear initiative and what practically the whole world regards as a nuclear program for the production of atomic bombs. The Iranian program to enrich uranium and its adamant refusal to agree to have international inspection of its facilities and to cease the local enrichment efforts in exchange for imported enriched uranium 235 have served to heighten the contention that Iran’s’ nuclear efforts are not peaceful.

Iran, a signatory of the Nuclear Non-Proliferation Treaty, NPT, was found in 2003 to be in non compliance of its obligations under the treaty. As a result the International Atomic Energy Agency, whose Director General at the time was Mohammad El Baradei reported this violation to the United Nations Security Council in 2006 which has resulted in sanctions against Iran and on and off negotiations regarding its right to enrich uranium.

The suspicion that Iran is pursuing nuclear weapons has heightened international commitment that the world has to act decisively to stop nuclear proliferation and enforce the 1970 NPT statutes.  This current nuclear standoff between Iran and the international community is further complicated by the nature of unfriendly relations between Iran and Israel where some Israelis regard an Iranian atomic bomb to be an existential threat to the state of Israel.

It is hoped that ultimately cooler minds will prevail, Iran will find a way to pursue its peaceful nuclear program without the need for local uranium enrichment and that the palpable level of tension with Israel will  be brought under control. But even if all goes well and all the nuclear issues between Iran and the rest of the world are resolved the neighbouring Arab states have become directly involved in a different kind of a nuclear race.  The UAE, Saudi Arabia, Egypt, Jordan and possibly Kuwait have either embarked on programs to generate electricity from nuclear power or are seriously considering it.

So why shouldn’t these countries generate electricity from nuclear power? That does not contravene any NPT regulations.  What is most ironic is that probably none of these programs would have been given the approval to proceed had it not been for the Iranian nuclear program. Most of the Arab countries and the GCC in particular feel uncomfortable with an assertive nuclear Iran and so felt that they would respond the best way that they can by adopting peaceful nuclear technology. Nuclear power became the new status symbol in the region and the major providers of the technology; US, Japan France, S. Korea and Russia; welcomed the prospect of tens of billions of dollars for the proposed plants.

But do nuclear power plants make sense?  Nuclear power is risky, dirty and inefficient. No one in the world has any workable solution for disposing of nuclear waste,  an accidental meltdown of a nuclear core is within the realm of possibilities, the uranium deposits are limited and the cost of producing electricity through a controlled nuclear reaction is competitive only because of the fuel subsidies  and the limits on liability to make insurance affordable.  Then there is the question of huge capitalization and the prohibitive price of decommissioning.

It’s ironic that when the countries who have the technology and the know how to go nuclear have decided not to. The US has not built a nuclear power plant in over thirty years and there are major public outcries whenever renewing the license for any of the existing ones comes up. Germany has even gone further than the US. Germany is on a process of phasing out all its current nuclear power plants and is replacing them by renewable clean energy. 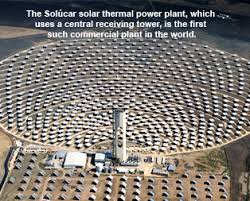 Sunlight is for free and is very abundant in each of the Arab states that are going nuclear. Besides the abundance of the sun there is also abundance of land close to the final demand for electricity. All of these factors combine to make concentrated thermal solar a clean, inexpensive energy source that will be difficult to beat. Where else would one get a guarantee for the price of the fuel for decades to come?  Many of the plants in the Mojave Desert in California and the plans for 2 gigawatts of solar thermal in China show that electricity can be produced through this technology for about 6-7 cents per kilowatt hour.

It is not too late for the UAE to shift gears and change its nuclear plants into solar thermal ones and obviously Saudi Arabia, Egypt and Jordan should reconsider seriously the long term implications of nuclear power and whether it is worth the risk and the additional cost.  Investment decisions especially costly projects that are expected to last for decades should not be undertaken on the basis of fads and status symbols they should instead be undertaken on the basis of efficiency, safety and communal good. Under fair conditions solar thermal will win against nuclear every time.It would be regretable if the only lasting legacy of the Iranian nuclear standoff with the international community turns out to be nuclear power generation in countries that are very well endowed with land and sunlight.