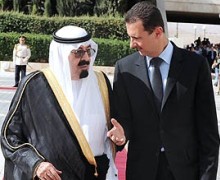 His visit comes on the eve of a joint mission to Lebanon aimed at reducing the political tensions in the country.

“During their talks, the two leaders touched upon the situation in Lebanon and the importance of overcoming the differences between its sects to achieve the security and peace for the Lebanese people,” the Saudi state-run news agency SPA reported.

Abdullah and Assad also discussed “the stalled peace process and the need to unify Palestinian ranks and achieve just and comprehensive peace that guarantees the return of occupied Arab territories to their owners.”

“The talks also covered the situation in Iraq “and the urgent need to accelerate the formation of a national government working to give priority to the interests of Iraq on the personal interests and preserve Iraq’s unity and integrity and security of its citizens,” added SPA.

The two leaders are to travel to Beirut on Friday as part of a flurry of diplomatic efforts to contain a potentially explosive situation in Lebanon and fears of a new sectarian conflict over the anticipated indictment of the Special Tribunal for Lebanon (STL) .

Assad’s visit will be his first since the 2005 assassination of former premier Rafik Hariri — father of current Prime Minister Saad Hariri — after which relations between Damascus and Beirut took a sharp downturn.

Syria, as the main power-broker in Lebanon at the time, was widely blamed for the murder of Hariri , but it has consistently denied any involvement.

Relations have been on the mend since 2008, when diplomatic ties were established for the first time between Beirut and Damascus, and Saad Hariri has made four trips to Syria in the past eight months.

The diplomatic efforts are widely seen as an attempt to ease tensions after Hezbollah leader Sayyed Hassan Nasrallah admitted last week that the U.N. tribunal probing Rafik Hariri’s murder was poised to indict members of the Shiite powerful group.

The announcement prompted fears of a new conflict between Hezbollah, which is supported by Syria and Iran, and March 14 rivals, similar to the deadly street fighting that rocked mainly Muslim west Beirut in May 2008.

In their talks in Damascus on Thursday, the Saudi king was expected to press Assad to use his influence over Hezbollah to avoid a conflict.

US: Assad should listen to Abdullah

“King Abdullah has played a significant leadership role in the region. So his prospective travel to Syria and to Lebanon is consistent with his search for peace, (and) his promotion of the Arab Peace Initiative.”

“We think that President Assad and other Syrian leaders should listen very attentively to what King Abdullah will tell them.”