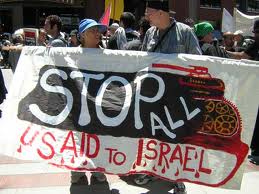 Can Israel afford to continue to occupy Palestinian territory? “Israel’s ongoing occupation of the Palestinian territories is damaging the economy of the Jewish state,” said a report published by Adva Center for Information on Equality and Social Justice in Israel.

The overall conclusion is that “the prolonged conflict with the Palestinians undermines sustainable economic growth, burdens the budget, limits social development, absorbs most of the energies of the political leadership calls into question the legitimacy of the actions of the Israeli Defense Forces (IDF) and isolates Israel internationally,” the paper summarizes.

“Between 1989 and 2010, the Ministry of Defense received budget increments earmarked for the Palestinian conflict in the amount of some $12 billion, a sum that exceeds the 2009 budgetary outlay for schools and institutes of higher education,” the report contends.

The Zionist dream of turning all the land of Palestine into a Jewish state may be too costly to sustain.

The Israeli reputation of violating international law has spurred a growing international movement to mount campaigns of Boycotts, Divestment and Sanctions (BDS) against Israel. Joining the movement are boycotts by UK labor unions, and a South African Trade Unions BDS campaign. The Israeli Journalist Federation has been dismissed from the International Federation of Journalists, the Spanish have placed an academic boycott of Ariel University because it is located on occupied Palestinian territory in the West Bank, French Solidaires Industries have mounted a BDS campaign against Israel, as have the Belgian Trade Union Federation, the Indian Cochin Port Union, and Basque trade unions in Spain.

U.S. administrations from that of Nixon to Obama have consistently opposed the settlements as obstacles to peace in the Middle East, and Palestinian administrations, most recently that of President of the Palestinian Authority Mahmoud Abbas, and the Arab League, have refused to engage in peace talks with Israel as long as building in Israeli settlements continues.

Since 1973, Israel has cost the United States about $1.6 trillion. If divided by today’s population, that is more than $5,700 per person. Israel receives about $3 billion in direct foreign assistance each year, which is roughly one-fifth of America’s entire foreign aid budget. In per capita terms, the United States gives each Israeli a direct subsidy worth about $500 per year.

On the other hand, the settlement movement has cost Israel $100 billion in the past 40 years, or $2.5 billion a year; roughly equal to the U.S. aid package to Israel.

Therefore, one could make the point that cessation of U. S. aid to Israel could solve many problems, for the U.S., the Arab world and Israel. Israel would have to abandon the settlements, Middle East peace talks would flourish, Israel could restore its economic growth and reestablish itself as a respected member of the international community. Arab anger over the Palestinian occupation, which foments anti-American sentiment, would subside. It would also reduce Al Qaeda’s ability to exploit that anger and mobilize support.

*Ron Estes served 25 years as an operations officer in the CIA Clandestine Service. Six of those years were in Middle East operations.