Catalonia became the first Spanish mainland region to ban bullfighting after its parliament voted Wednesday to outlaw the tradition on animal cruelty grounds.

The vote was 68 in favor and 55 against, with nine abstentions. 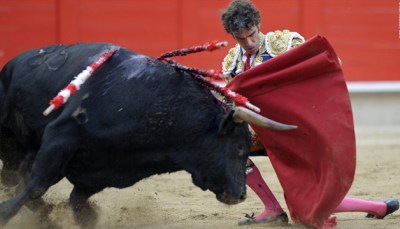 Those who see the ancient tradition as animal cruelty were ecstatic about the vote, celebrating in the street outside parliament. Fans of bullfighting said the decision, however, does not mean it will disappear from other regions in Spain.

Some analysts have said Catalan nationalism — including the desire by some in the region for independence from Spain — played a part in the vote. The upcoming regional elections for parliament later this year may have also had a role.

Bullfighting is an ancient tradition in Spain, and fans say it combines culture, ceremony and artistry. Opponents, however, consider it animal cruelty.

Activist Aida Gascon, of the Anti-Bullfighting Party, known as PACMA, said she has attended just one bullfight in her life, and that was only to get a sense of the bull’s suffering.

“Bullfighting is part of Spanish culture,” Gascon said. “But that should change. Many traditions disappear as the society advances.”

Enrique Guillen, 24, lamented that he might be the last Barcelona-born bullfighter to take the “alternativa,” or ceremonial fight in the ring against the biggest bulls to become a full-fledged matador, which he did last year at Barcelona’s sole remaining bullring, the Monumental.

Guillen’s father worked at the bullring, opening the doors for bulls to charge in to face matadors and their death.

“My father brought me to see the bullfights when I still had a pacifier,” Guillen said. “It would be frustrating not to be able to give to my children what my parents gave to me.”

The number of bullfights across Spain has dropped by a third in recent years, mostly because of the budget constraints of local governments, which often fund the spectacles.

In Catalonia, there are now just more than a dozen fights a year and the Monumental bullring in Barcelona is one of the few places in the region that still holds fights.

A pro-bullfighting group called PPDF released a study predicting big economic losses for Catalonia if bullfighting were banned, mainly because the Catalan government would have to pay damages to the bullfighting industry, which holds long-term operating licenses.

“When the Catalan government and the opposition are working hard to trim the budget, how could they justify making big indemnity payments to the bullfighting industry, when it’s not necessary,” PPDF President Luis Corrales said.

Critics have disagreed, saying the economic impact would be minimal given the small number of fights still held in Catalonia.

The proposal to ban bullfighting started as a popular initiative in Catalonia and was accepted for consideration by parliament last year by a slim margin of votes. Since then, there has been an ever-intensifying debate, with bullfighting proponents and opponents gathering support from across Spain, even from abroad.

The ban is due to take effect in January 2012. It will not end bullfighting in the rest of Spain, where it still has a strong following in Madrid and in the south around Seville.

Spain’s Canary Islands in the Atlantic Ocean does not allow bullfighting, but the ban in Catalonia is considered a bigger blow to the tradition.CNN