Jumblatt: There will be no war in the near future

” All spies must be executed… We have had enough with some civil society calls on the need to abolish the death penalty for the sake of the Euro-Mediterranean Partnership because the country’s security is more important,” he said

On the issue of the Special Tribunal for Lebanon (STL) Jumblatt said:

“When Ashkenazi said that September would be unstable due to the indictment of the Special Tribunal for Lebanon, I remembered the Der Spiegel remarks, and we must foil any Israeli infiltration of the Lebanese interior.”

A Der Spiegel report dated May 2009 revealed a link between Hezbollah and the 2005 assassination of former PM Hariri.

On the issue of the recent clashes of south Lebanon residents with UNIFIL Jumblatt said:

“Some of UNIFIL’s behaviors and photographing of some places, and maybe provocations and maneuvers without coordinating with the army, led to the reaction of the southerners.”

On the issue of Future wars he said:

“War depends on the Western-U.S.-Israeli timing, and they may wage a war on Iran if they reached a belief that sanctions aren’t useful, and Lebanon and the Gulf can’t be isolated from any war on Iran.”

He added: “Mount Lebanon will become a strategic depth for the Resistance in any new war, as all areas must be, and I tell some hesitators that Israel has not and will not be merciful on anyone in its war.”

He said: “The decision to wage an all-out aggression against Lebanon in 2006 was not taken only by Israel, because Israel can’t do anything without the permission of the U.S.”

He concluded: “I don’t believe there would be a war in the near future because the U.S. administration has the midterm elections soon, and if Obama was defeated, hawks would rise to power. The timing of war is related to Iraq and Afghanistan.” 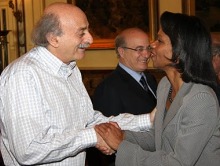 Jumblatt seems to regret his association with the United States following the assassination of Lebanon’s former PM Rafik Hariri in 2005.

He said: “I took part in the lunch at the U.S. Embassy with (former U.S. Secretary of State) Condoleezza Rice (in 2006), and I believe that was a shameful scene: Lebanon was being destroyed and we were waiting for the U.S. envoy.”

He added: “One has to acknowledge his mistakes and not hide behind a finger, we were taken by the motto of freedom and independence while the reality was different. I’m not ashamed to perform self-criticism and some have to understand that.”

Neutrality: Like Nasrallah, Jumblatt criticized the Lebanese leaders who are calling for neutrality:”Some still long for the neutrality theory and they adopt the theory that says that the Resistance’s arms give Israel an alibi, he said