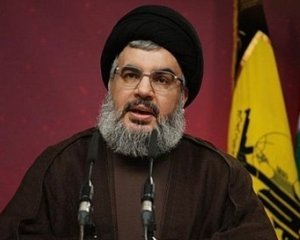 He started the speech by offering his condolences over the death of Grand Ayatollah Mohammed Hussein Fadlallah. He said ” It is a loss for Lebanon and the resistance.”

Nasrallah attacked the spies / agents for Israel. He said:

“The spies that have been arrested provided information that helped in the attack against several locations and individuals and they are therefore partners in the killing of innocents.”

He said the Lebanese agents and spies working for Israel played a major role before the war “because they provided the enemy with a list of targets.”

He added :’There are some individuals who presented direct services to the enemy that enabled them to attack locations that were not part of their original list of targets. ”

Nasrallah said: “Several agents admitted that they were required to create disputes that would lead to strife between AMAL and Hezbollah and other factions, especially between Shiites and Sunnis. ”

Nasrallah said: It has become clear beyond a shadow of a doubt that Israel completely controls all communication networks in Lebanon, and we warn that the country is exposed to the enemy.

He said that the greatest strength during the 2006 war was Hezbollah’s military telecommunications network.

Nasrallah said “The May 5 decision by the cabinet against Hezbollah’s telecommunications network was not innocent and I demand the government to launch an investigation over what happened and to find out the mastermind behind this action in Israel.”

Nasrallah said the state should uncover the big spies since it has already uncovered the small ones and I demand that the political leaders discover who fooled them into taking their May 5 decision.

Nasrallah added : We fear that those who led Lebanon to the brink of civil war on May 5 may be safe and that they may once again lead Lebanon to new dangers.

He added: I am not accusing the leaders or ministers, I am simply saying to be more careful and to look into who was behind the incident because it was an Israeli spy handler.

Nasrallah wondered : “Why did the issue of Charbel Qazzi cause such an uproar while other more dangerous agents have been arrested and no one spoke of them?”

He added: Qazzi is linked to the telecommunications and therefore, to the STL and some say that the indictment will be against some Hezbollah members.

Nasrallah said : Some are bargaining on a new war that will be caused by the indictments and I will respond to them on the anniversary of the victory in the July 2006 war.

Following the May 5 decision by the cabinet Hezbollah occupied west Beirut and tried to occupy the Druze stronghold of Mt Lebanon.

“The death penalty should be issued against all those proven to have collaborated with Israel and I commend President Suleiman’s position in which he affirmed that he would sign any death sentence against agents.”

Nasrallah thanked the security forces and the army intelligence for their efforts in uncovering the agents.

Nasrallah attacked those who call for neutrality of Lebanon:

“Those who speak of neutrality are deceitful. They serve the enemy’s interests and call themselves ‘neutral.’ When Israel invaded Lebanon in 1982, many people said it was somebody else ’s war on our land. What would have happened if we believed that, and forgot that the war was between the Lebanese? Where would Lebanon be today?”, he said

He added: “You will find no holier or nobler battle on Earth than combating the Zionist enemy.”

As was expected, Nasrallah commented on the recent talk about the Special Tribunal for Lebanon

“The Israelis are standing by helpless before the Resistance’s strength and readiness and they are waiting for the STL to create an uproar in Lebanon so they may live in a tense atmosphere that would lift the pressure off of them.”

A Der Spiegel report dated May 2009 revealed a link between Hezbollah and the 2005 assassination of Lebanon’s former Prime Minister Rafik Hariri.