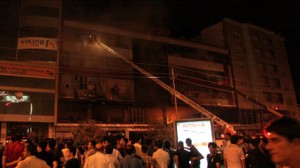 A fire that raged quickly through a northern Iraqi hotel killed as many as 30 people, with at least 14 of them foreigners, police told reporters today.

At least three of the victims jumped to their deaths from the Soma Hotel in the Kurdish city of Sulaimaniyah, witnesses told news agencies. The dead also included four women and four children. One of the women was pregnant.

The hotel was not equipped with fire escapes. Most of the victims died from smoke inhalation because “they could not get out,” a local health official told Reuters.

The blaze, which also left 22 people injured, was caused by an electrical short, police chief Brig. Gen. Najim-al-Din Qadir said. A local security official confirmed it was “not a terrorist act.”

The semiautonomous region of Kurdistan is rich in oil deposits and has become a thriving economic center, attracting foreign investors from the Middle East and around the world.

An early hospital report said four Americans were among the victims, but a U.S. Embassy spokesman told Agence France-Presse that it had not been confirmed.

An official with a telecom company, Asiacell, told AFP: “We lost four engineers from our company, one of them a lady from the Philippines, and three of them men from Sri Lanka, Cambodia and Iraq.”

Nearby buildings were also damaged by the blaze. The owner of a shop next to the hotel told The Associated Press: “I saw three people jump from their floor to escape the fire, but they were killed when they hit the ground.”

The minority Kurds have long sought independence from Iraq, and Kurdish separatists frequently clash with neighboring Turkey. In one of the most recent battles, 10 Kurds and three Turkish soldiers died this month when rebels attacked a Turkish military outpost.

But while many areas of Iraq are still subject to violence in the aftermath of the Gulf War, the Kurdish region has remained comparatively stable.AOL

Photo: A fire in a five-story hotel in northern Iraq killed scores of people Friday. At least some appeared to have died as they jumped from the windows to escape the blaze.