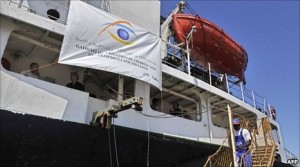 The Libyan aid ship bound for the Gaza Strip has apparently changed course for Egypt following a warning from the Israeli navy.

The vessel, Al-Amal, now appears bound for the Egyptian port of El-Arish, on the Sinai peninsula. The Israeli navy warned the vessel on Tuesday to change course, and said it had “begun preparations for stopping the ship”.

Egyptian officials have given the ship permission to dock at El-Arish.

The ship is carrying 12 crew members and at least nine passengers, including six Libyans and one each from Algeria, Morocco and Nigeria. Organisers say the ship is transporting 2,000 tonnes of food and medicine for people in the Gaza Strip.

The Israeli navy denied reports that it issued any ultimatum to the ship. Organizers on board said the navy warned it would take over the ship if it did not change course.

Ahmed Aboul Gheit, the Egyptian foreign minister, said earlier on Tuesday that Egyptian authorities would unload the aid and distribute it into Gaza if the ship docks at El-Arish.

The ship set sail from Greece on Saturday. The Israeli government has warned that allowing the ship to breach the Gaza blockade would have “very serious consequences” for Israeli security.

“Israel will not let the boat reach Gaza,” Yossi Peled, a minister in the Israeli cabinet, said on Sunday.

An attempt by a flotilla of aid vessels to breach the blockade in May led to the deaths of nine pro-Palestinian activists after Israeli commandos boarded the lead ship.

Following an international outcry over the raid, Israel recently eased restrictions on the Gaza Strip, allowing some previously-banned items into the territory. But construction materials remain heavily restricted, Gazans have very limited freedom of movement, and Israel still enforces a naval blockade of the territory.