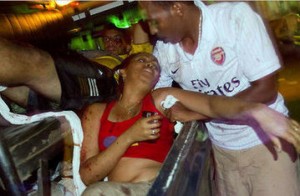 The Somali Islamist group al-Shabab has said it was behind twin blasts which hit the Ugandan capital Kampala on Sunday, killing 74 people.

A spokesman for the group, Sheikh Ali Mohamud Rage, threatened more attacks in a statement in Mogadishu.

A Ugandan official said a Somali’s head was found at the scene of one blast, and he may have been a suicide bomber.

Ugandan peacekeepers are in Somalia, and al-Shabab has previously threatened Kampala.

“Al-Shabab was behind the two bomb blasts in Uganda,” Ali Mohamud Rage said.

“We thank the mujahideens that carried out the attack. We are sending a message to Uganda and Burundi, if they do not take out their Amisom [African Union Mission in Somalia] troops from Somalia, blasts will continue and it will happen in Bujumbura [the Burundi capital] too.”

The explosions, which also injured about 70 people, ripped through a rugby club and an Ethiopian restaurant as football fans watched the last few minutes of the World Cup final.

The deadliest of the blasts was at the crowded rugby club. At both scenes chairs lay overturned, with blood and pieces of flesh on the floor.

Earlier in Mogadishu, an al-Shabab commander said he was pleased with the blasts in Uganda, but did not admit it was the militant group’s work.

“We know Uganda is against Islam and so we are very happy at what has happened in Kampala. That is the best news we ever heard.”

Ugandan Internal Affairs Minister Matia Kasaija told the BBC that the severed head of a person from Somalia had been identified at the scene of one blast.

He told the World Today programme Uganda had been aware of the threat, but had been caught off-guard.

About 5,000 African Union troops from Uganda and Burundi are based in Mogadishu propping up the fragile interim government.

The Amisom force is engaged in frequent firefights with the Islamist insurgents that control much of southern and central Somalia.

The attack on the Ethiopian restaurant also fits in with al-Shabab’s regional policy.

Addis Ababa backs Somalia’s government against the rebels. And Ethiopian troops invaded Somalia in 2006 to oust an Islamist movement, stoking an insurgency that still rages.

BBC East Africa correspondent Peter Greste says security services across the region will now be reassessing how they can protect themselves from a force that has proven itself willing and capable of striking outside Somalia’s borders.

Many – if not most – of those killed and injured in the Kampala blasts were foreign nationals, with both venues popular destinations for expatriates living in the capital.

One unnamed witness told the BBC how he was caught in the rugby club blast.

“I just heard the bomb. In fact, I blacked out… when I gained consciousness, then I started now, crawling, coming out,” he said.

California-based aid group Invisible Children, which helps child soldiers, said one of its workers, Nate Henn, 25, was among those killed at the rugby club.

Ugandan government spokesman Fred Opolot, quoted by Reuters news agency, said an Irish woman was among those who died at the restaurant.

At least three Americans, members of a Church group from Pennsylvania, were wounded at the Ethiopian restaurant.

One, Kris Sledge, 18, of Selinsgrove, Pennsylvania, said from his hospital bed: “I remember blacking out, hearing people screaming and running.”

Ugandan President Yoweri Museveni criticised the attackers and said his country would not “run away” from its commitments in Mogadishu.

“People who are watching football are not people who should be targeted. If they [attackers] want a fight, they should go and look for soldiers.”

US President Barack Obama said the explosions were “deplorable and cowardly”.

The African Union has said the attacks will not affect its summit, which is due to be held in Kampala later this month.BBC