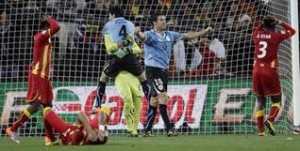 Uruguay reached the World Cup semifinals for the first time since 1970, beating Ghana 4-2 on penalties after a 1-1 draw Friday.

Sulley Muntari gave Ghana the lead with a 35-meter left-foot strike seconds before halftime at Soccer City, but Diego Forlan equalized from a free kick in the 55th minute

Asamoah Gyan had a chance to win the match for Ghana with the final kick of extra time, but he hit the crossbar with a penalty after Luis Suarez was sent off for handling the ball on the line.

Uruguay will play the Netherlands in the semifinals on Tuesday in Cape Town.

Earlier today Netherlands knocked off mighty Brazil , stamping the Dutch as a strong contender to finally win the title.

Wesley Sneijder, one of the shortest players on the field, scored in the 68th minute on a header for a stunning 2-1 quarterfinals win over the five-time champions. AP