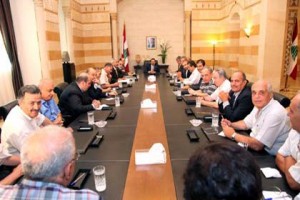 Union chief, Hanna Gharib, said the deal promises the teachers two-thirds of their original salary demands (a level-4.5 pay raise instead of their initial demand of level-7 )

Unions’ Delegates Council and Examination Committees, will hold a general meeting on Friday morning to sign off on the deal

The Union has not yet called off the grading boycott, Gharib added, but said the administrative committee recommended the boycott be suspended beginning on Saturday. He said the issue will be discussed Friday.

In mid-June, the Union asked its teachers to refuse to grade students’ final exams after the Education Ministry did not meet their salary demands.