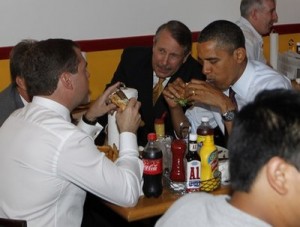 President Barack Obama and Russian President Dmitry Medvedev took a break from bilateral meetings at the White House on Thursday to make a burger run.

A cheer went up from customers when the presidents walked in.

During their meal, Obama and Medvedev sat at a table with their interpreters, sharing a conversation through them.

Both leaders were in shirt sleeves on a sweltering summer day. Other customers were seen enjoying their own meals and largely leaving the presidents alone.

During a stop in California on Wednesday Russian President visited Twitter’s Silicon Valley headquarters and sent his first tweet.

“Hello everyone. I am now in Twitter, and this is my first message,” he wrote in Russian, under the name KremlinRussia. So far, the Russian president is only following three others on Twitter: the White House, President Barack Obama, and the English-language version of Kremlin Russia.

During a speech at Stanford University he said : “Russia is trying to become an open country; Open for investment, for trade, for joint projects in any sector of public life, and of course in economics.”