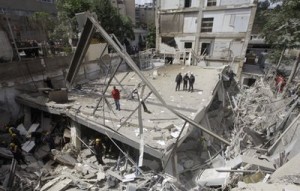 A six floor aluminum factory collapsed on Thursday in a northern suburb of Beirut, trapping three people under the rubble, two of whom remain missing, a civil defense official said.

“The building crumbled to the ground at 6:15 am (0315 GMT) in an industrial area in Zouk Mosbeh,” some 15 kilometers (nine miles) north of the Lebanese capital, Brigadier General Darwish Hobeika told AFP.

“We have found a 35-year-old Lebanese man who was trapped in the building,” he said. “Our team has maintained communication with him and we expect him to be pulled from the rubble shortly.”

Hobeika, who is overseeing the rescue efforts, said civil defense forces were still looking for two Indian workers who were in the factory when all six floors suddenly caved in, adding that they might be trapped in the basement.

He did not rule out shoddy construction as a possible reason for the collapse but said officials would wait until the investigation was complete before announcing the cause.

“We are also concerned about the surrounding buildings, which are all factories and are subject to continuous shaking and vibrations,” Hobeika said.

“If there is ever an earthquake in the area, not one building would be left standing.”

Rescuers have managed to pull the body of one Indian worker from the rubble of the collapsed aluminum factory in Zouk Mosbeh. The second Indian worker remains missing.

The Lebanese worker who was rescued hours after the collapse of the building was identified as Hareth Abboud. The rescue effort continues according to local reports