Israel lifting blockade of Gaza ‘except for military items’ 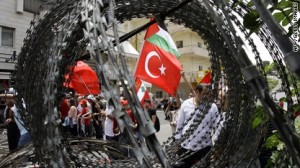 “Israel has decided to enable the flow of all civilian goods into the Gaza strip. From today, there is a green light approval for all goods to enter into Gaza except for military items and materials that can strengthen Hamas’ military machine,” a source in Netanyahu’s office told CNN.

Netanyahu said in a statement Israel would “publish a list of items not permitted into Gaza that is limited to weapons and war material, including problematic dual-use items. All items not on this list will be permitted to enter Gaza.”

Israel’s military stopped the flotilla and boarded the ships. Israel says its troops were attacked with knives, metal poles and other objects on one of the boats, and the flotilla passengers say they were fired upon without provocation.

The step is among six the Israeli government will begin implementing as soon as possible, including expanding operations at the existing operating land crossings and streamlining the permitting process of international aid groups the government recognizes, the prime minister said.

The naval blockade of Gaza remains in place, and military officials will continue to inspect goods on Gaza-bound ships, Netanyahu said. “Israel will continue to facilitate the expeditious inspection and delivery of goods bound for Gaza through the port of Ashdod.”

Blair, who met with Netanyahu on Sunday, said the move should radically change the exchange of goods in the area.

“Plainly there are still issues to be addressed and the test of course will be not what is said, but what is done,” Blair said in a statement. “But I welcome strongly this statement of policy and the Office of the Quartet Representative looks forward to working closely with the Government of Israel and other partners on its implementation.”

The White House also commended the policy, saying it will improve conditions for Palestinians in Gaza while preventing the entry of weapons.

“We will work with Israel, the Palestinian Authority, the Quartet and other international partners to ensure these arrangements are implemented as quickly and effectively as possible and to explore additional ways to improve the situation in Gaza, including greater freedom of movement and commerce between Gaza and the West Bank,” the statement said. “There is more to be done, and the president looks forward to discussing this new policy, and additional steps, with Prime Minister Netanyahu during his visit to Washington on July 6.”

“Over these coming months we therefore need: to improve life in Gaza; continue the growth in the West Bank and the PA development of its institutions for statehood; and ensure that the indirect talks, led by Senator Mitchell, turn into full direct negotiations,” Blair said.

The White House said, “there is no need for unnecessary confrontations, and we call on all parties to act responsibly in meeting the needs of the people of Gaza.”

Photo: Protesters wave the Palestinian flag while protesting in Turkey earlier this month against the Israeli raid of the Turkish aid ship for Gaza that resulted in the killing of nine including one Turkish-American. The raid caused a worldwide outrage against the Jewish state