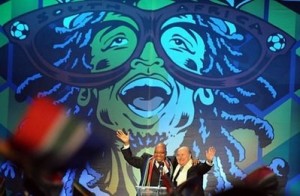 The opening ceremony of the 2010 World Cup has taken place in Johannesburg ahead of Friday’s first game of the world’s greatest sporting spectacle between South Africa and Mexico.

A global audience of hundreds of millions will watch the match from Soccer City stadium, which kicks off at 4 p.m. local time (2 p.m. GMT) with South Africa’s players carrying the hopes of the host nation on their shoulders.

The big kickoff was preceded by a spectacular tribal-themed ceremony inside the 94,000-capacity showpiece arena where fans were treated to a dazzling array of dancers in traditional costumes, as well as music from Grammy winner R Kelly.

South African President Jacob Zuma and Archbishop Desmond Tutu were there but former president Nelson Mandela was absent following the death of his great-grandchild in a car crash early on Friday morning.

Fans were dressed in the yellow jersey of the South African team and carrying vuvuzelas — a plastic horn favored by South African football fans — and the country’s post-apartheid rainbow flag.

Many displayed homemade banners, one reading: “49 million South Africans vs. 11 Mexicans.” Another said: “I believe we can win the World Cup! Because this is a country of possibilities.”

“We are all so excited. We woke up at 5 a.m. just to make sure we would get here in time but we only left at 7 because we were singing and dancing at home,” Hope Zini, who was first into the stadium, told FIFA.com.

“The World Cup is inside us. We are eating, sleeping and feeling it.”

The month-long tournament, which takes place every four years, marks the World Cup’s first visit to the continent of Africa in its 80-year-history. Ten venues around the country will host 64 matches, culminating in the final on July 11 at Soccer City.

Why the World Cup is sports’ biggest occasion

Thirty-two teams are taking part with world champions Italy defending the title they won in Germany four years ago. European champions Spain and five-times winners Brazil are considered the favorites. As well as the hosts, Ivory Coast, Nigeria, Cameroon and Algeria are carrying African hopes.

Stars players such as the current world footballer of the year Lionel Messi of Argentina, Portugal’s Cristiano Ronaldo, Brazil’s Kaka and England’s Wayne Rooney are hoping to follow in the footsteps of former legends such as Pele and Diego Maradona by writing their names into World Cup history.

How you can sound like a World Cup expert

South Africa’s team — who rank just 83rd in the world — face a massive challenge if they are to avoid becoming the first host nation to be eliminated in the first round. South Africa have won just one match in their two previous appearances at the World Cup.

After Mexico, they also face France and Uruguay, who play each other later Friday in Cape Town. The top two teams from each of eight four-team groups advance to a knockout round of 16.

CNN teams up with Foursquare for World Cup

But star midfielder Steven Pienaar said the “Bafana Bafana” — the South Africans’ nickname — would strive to make their supporters proud.

“We have a big game against Mexico, that is all that is on my mind now. Our dreams have to come true,” Pienaar told FIFA.com. “We have been waiting for this game.”

In 1990 Cameroon shocked world champions Argentina and Senegal matched that feat against France in 2002.

The tournament could be the loudest World Cup ever due to South African fans’ habit of turning up to matches with vuvuzelas — a plastic horn which has attracted criticism from some players and officials because of its ear-splitting noise levels.

“I can only imagine the sound that will erupt if South Africa score. It will be crazy,” said Pinto in Johannesburg.

Will you be following the World Cup? Send videos, stories, photos

But there was sadness Friday over the death of Mandela’s 13-year-old great-grandchild, Zenani Mandela, in a car crash as he was returning home from a World Cup kickoff concert in Soweto.

Mandela, an icon of black South Africans’ struggle against white rule, played a key role in bringing the World Cup to South Africa. FIFA President Sepp Blatter said the 91-year-old would be “be with us in spirit.”

“The entire football family mourns with you and your family, and today we stand by their side,” Blatter wrote in a letter to Mandela.

The World Cup is the world’s biggest sporting event with FIFA, football’s governing body, predicting a cumulative TV audience for the tournament of more than 26 billion.

Photo: South African President Jacob Zuma (left) and FIFA President Joseph Blatter wave to the crowd as they officially start the FIFA World Cup Kick-off Concert at the Orlando Stadium in Soweto. South Africa began the World Cup party on Thursday with revellers flocking to a star-studded concert and fan festivals on the eve of Africa’s first staging of the biggest show on earth