Wife of Sibat appealing for his release 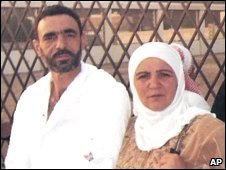 The wife of a Lebanese TV psychic ( R) is appealing for her husband’s release just months after he escaped beheading in Saudi Arabia, which convicted him of witchcraft.

Samira Rahmoon held a small protest on Friday outside the Serail building (government headquarters ) in Beirut. She says Lebanese officials promised her that her husband would soon return home.

Ali Sibat was arrested by the Saudi religious police during a pilgrimage in the kingdom in May 2008. He was sentenced to death last November on charges of practicing witchcraft.

The case gained worldwide attention in April, when Sibat’s attorney said he was going to be beheaded. Saudi officials later decided he wouldn’t be beheaded.

His family says he is still being held in Saudi Arabia. AP