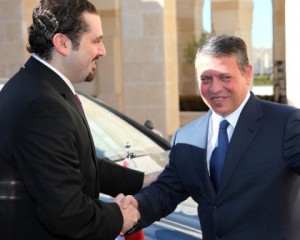 Lebanese Prime Minister Saad Hariri, accompanied by a delegation arrived in Amman on Tuesday at the start of an Arab tour that includes Egypt and Saudi Arabia.

Media reports had Saad that Hariri was to travel to Cairo on Tuesday for talks with Egyptian President Hosni Mubarak.

Hariri was received by Jordanian Minister of State Rajai Muasher and Lebanon’s Amabassador to Jordan Charbel Aoun, before heading to the Royal Diwan to meet with Jordanian King Abdullah II.

On Thursday, the premier will travel to Istanbul for talks with top Turkish officials, al-Liwaa daily reported.