by yalibnan
1589
Four Lebanese activists detained during an Israeli raid on a Gaza-bound humanitarian aid arrived at the Lebanese border to a hero's welcome.
Share: 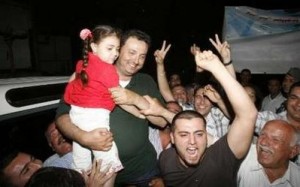 Four Lebanese activists detained during an Israeli raid on a Gaza-bound humanitarian aid arrived at the Lebanese border to a hero’s welcome.

The men, looking tired, were handed over by Israel to the International Committee of the Red Cross late Wednesday.

Suleiman, who headed the Lebanese mission to the Freedom Fleet, suffered a gunshot wound to his foot. He arrived at Naqoura in an ambulance.

“We hear a lot about Israeli brutality, but when you see it close up it’s a different story,” said Nasser, who works as a news reporter for Al-Jazeera satellite channel.

He told reporters that he saw “hundreds of soldiers armed to the teeth.”

“I was able to tell the Zionists face to face that ‘you murdered my children,'” said Shukur whose wife and children were killed in an Israeli air raid during the summer 2006 war on Lebanon.

An-Nahar newspaper said a fifth Lebanese activist, Nabil Hallak, will be handed over to the Irish embassy in Tel Aviv, given that he holds both the Lebanese and Irish nationalities.