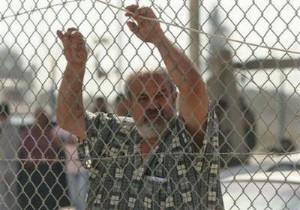 “We heard gunfire – then our ship turned into lake of blood.”

First eyewitness accounts of the deadly commando raid confirm that Israelis opened fire before boarding the Gaza flotilla, contradicting the version put out by Israeli officials who said that the use of armed force began when its boarding party was attacked.

The nightmare did not end after they were taken into custody in Israel, many were badly beaten during interrogation.

Some formed human shields, others fought back with makeshift weapons, while a few of the most vulnerable hid below deck and prayed for the violence and killing to stop.

But what united every survivor who spoke out today about yesterday’s pre-dawn assault by Israeli commandos on the pro-Palestinian aid flotilla to Gaza, was a sense of deep shock at the speed, aggression and lethal force of the Israeli response to what they reiterated was nothing more than a humanitarian aid effort.

Speaking on arrival back in Berlin, wrapped in an airline blanket from the Israeli national airline El Al, Norman Paech, a 72-year-old German pro-Palestinian activist described waking up to hear “striking explosions” as the assault began on the Mavi Marmara, the flotilla’s informal flagship.

“I hurried up and dressed myself and colleagues said to me ‘we’re under attack, the Israelis are here’,” he said. “The aggression came from the sky, from helicopters from which soldiers came down by ropes. We waited in the fore room and saw them carrying an Israeli soldier who looked to me like he’d had a breakdown. Then the second and third came, but after these three injured soldiers then I saw a lot – maybe 10 – passengers who were severely hurt, injured, covered in blood. They were treated in the salon next to me. One was so badly injured I am sure he must have died soon after. I didn’t even consider going upstairs as it was just too dangerous.”

One of the strongest condemnations of Israel’s actions came from the Swedish novelist Henning Mankell who had been aboard the Swedish aid ship Sofia. Mankell, the author of the Wallander series called for global sanctions against Israel to put pressure on it to lift the blockade of Gaza. “I think we should use the experience of South Africa, where we know that the sanctions had a great impact. It took time, but they had an impact,” Mankell said. He also denied there had been any weapons aboard the aid ships. “I can promise there was not a single weapon aboard the ships,” he told a reporter who was returning to Sweden with him after the writer had been deported by Israel. 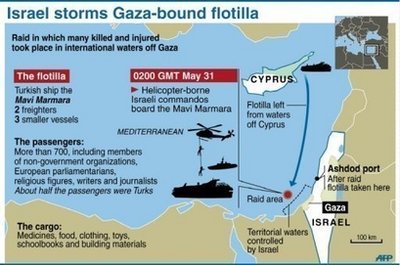 Nilufer Cetin, a Turkish activist, and her baby boy hid in a bathroom below deck as stun grenades, live ammunition and teargas exploded above them. Speaking on her return to Istanbul, she described how “the ship turned into a lake of blood”.

“We stayed in our cabin and played games amid the sound of gunfire,” she said. “I protected him by staying in my cabin, then went to the bathroom. I put a gas mask and lifejacket on my son. They used smoke bombs followed by gas canisters. They started to descend on to the ship with helicopters.” She added the clashes were “extremely bad and brutal”.

Iara Lee, a Brazilian filmmaker who was also on the Mavi Marmara, claimed the Israeli troops had invaded the ship after cutting all communications and “started shooting at people”. She spoke to Brazil’s TV Globo from the prison in southern Israel where an estimated 600 foreign activists, including around 40 Britons, were being held. Israeli officials said tonight that they would all be freed immediately.

Lee said: “[The attack] was a surprise, because it happened in the middle of the night, in the darkness, in international waters, because we knew there would be a confrontation but not in international waters. Their first tactic was to cut all of our satellite communications and then they attacked. All I witnessed first hand was the shooting. They came on board and started shooting at people.”

She said the commandos then sent the women to a lower level of the ship.

“They said we were terrorists – it was absurd. They came into the part where the women were, lots and lots of them, dressed in black and with gigantic weapons as if they were in a war. They confiscated all of our telephones and all of our luggage and took everything out of the bags and put it on the floor.”

“We expected them to shoot people in the legs, to shoot in the air, just to scare people, but they were direct,” she said, in a separate interview with the Folha de São Paulo newspaper. “Some of them shot in the passengers’ heads. Many people were murdered – it was unimaginable.”

The released activists gave varying accounts of the level of resistance mounted by the passengers.

Annette Groth, a German politician, described at a press conference how she had seen Israeli soldiers outside her cabin, after they had stormed the ship.

“They were shooting without warning,” she said. “It was like war … They had guns, Taser weapons, some type of teargas and other weaponry, compared to two-and-a-half wooden sticks we had between us. To talk of self-defence is ridiculous.”

Footage of the assault shown on Turkish TV and images released by the Israeli military clearly showed some commandos being beaten with sticks by passengers.

However, Paech said he saw no arms being used by the activists. “There were only two men with short sticks but no knives, iron rods, pistols or any real weapons,” he said. “Throughout our planning of the mission we said: ‘no arms, no explosives’, we said we’d only resist politically, with normal means.”

An Arab member of the Israeli Knesset, Hanin Zoabi, who was on board the Mavi Marmara, said “not a single passenger …raised a club”.

At a press conference in Nazareth, she said: “A clear message was being sent to us, for us to know that our lives were in danger. We were not interested in a confrontation. What we saw was five bodies. There were only civilians and there were no weapons … Israel spoke of a provocation, but there was no provocation.”

According to a spokeswoman for the Israeli Defence Force (IDF), Avital Leibovich, its warships gave the activists several warnings before commandos were dropped from helicopters on to the deck of the Mavi Marmara.

“We found ourselves in the middle of a lynching,” she told reporters in the Israeli port of Ashdod. About 10 activists had attacked commandos, taking their pistols, she said. “It was a massive attack. What happened was a last resort.”

The violence was not confined to the Mavi Marmara. Speaking at Athens airport, Mihalis Grigoropoulos, crew on one of the other five vessels, said the Israelis came down from helicopters and threw ropes from inflatable boats, climbing aboard using teargas and live ammunition.

“We did not resist at all, we couldn’t even if we had wanted to,” he said. “What could we have done against the commandos who climbed aboard? The only thing some people tried was to delay them from getting to the bridge, forming a human shield. They were fired on with plastic bullets and stunned with electric devices.”

Greek activist Dimitris Gielalis, aboard a third vessel, the Sfendoni, gave a similar account. “Suddenly from everywhere we saw inflatables coming at us, and within seconds fully equipped commandos came up on the boat. They came up and used plastic bullets, we had beatings, we had electric shocks, any method we can think of, they used,” he said.

The tough treatment did not end after they were taken into custody in Israel, others said.

“During their interrogation, many of them were badly beaten in front of us,” said Aris Papadokostopoulos.

“There was great mistreatment after our arrest,” added Grigoropoulos.