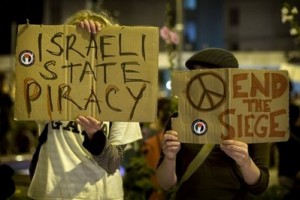 Despite widespread international pressure to release all of the detainees aboard the humanitarian ship bound for Gaza, Israeli authorities informed Lebanon that only 3 out of 5 Lebanese detainees will be handed over.

Israel said that 600 activists were transported to Beer Sheva prison in southern Israel. Forty-five of them have been released and were either deported or on their way to Ben Gurion International Airport in Tel Aviv.

Those who remain detained are ones who have refused to identify themselves to Israeli immigration authorities, an Israeli Prison Authority said.