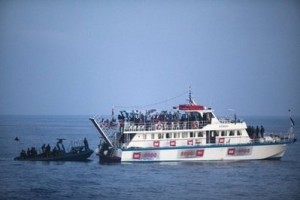 President Michel Suleiman on Monday “strongly” condemned the Israeli navy raid on a Gaza-bound aid flotilla describing it a crime against humanity.

Suleiman “strongly condemned the crime and massacre that Israel added to its list of murders and organized terrorism,” the presidency said in a statement.

Attacking a ship “carrying humanitarian aid and food to besieged people is a crime against humanity,” it said.

The president held the Jewish state fully responsible for endangering the lives of civilians aboard the ships and urged international humanitarian organizations to interfere and save them.

“Syria and Lebanon condemn the Israeli crime committed by Israel at dawn against unarmed civilians,” Hariri and Assad said in a joint statement.

They also urged the Arab League and the U.N. to take steps to put an end to the crimes.

“The Syrian Arab Republic and the Lebanese Republic strongly condemn the heinous crime committed by Israel this morning through the brutal attack on unarmed civilians on board of the freedom flotilla carrying relief supplies and humanitarian aid to the besieged Palestinian people in the Gaza Strip. Both sides called on the Arab League, the Organization of Islamic Conference, the Security Council and the international community to act immediately and take practical steps to put an end to Israel’s crimes and its flagrant violations of the basic humanitarian norms and international laws, which are threatening to plunge the Middle East into a war whose impact will not be restricted on the countries of the region,” said the statement.

The statement added: “President Assad and Prime Minister Hariri paid tribute to all those who were on board the freedom flotilla, and the parties who sent this flotilla for the relief of the people of Gaza, expressing their heartfelt condolences to the families of martyrs who fell as a result of the Israeli brutal aggression, and wished for a quick recovery to the injured. They also paid tribute to the Turkish government and the brotherly people of Turkey for their noble position in supporting the Palestinian people against the aggression and siege.”

Hariri’s visit to Damascus was his second to the Syrian capital in 10 days.