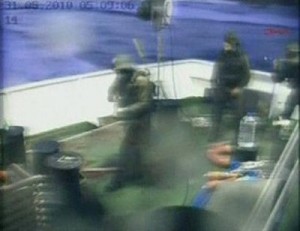 Israeli naval commandos stormed a flotilla of ships carrying aid and hundreds of pro-Palestinian activists to the blockaded Gaza Strip on Monday, killing at least 10 passengers in a predawn raid that set off worldwide condemnation and a diplomatic crisis.

Israel said its commandos were attacked by knives, clubs and live fire from two pistols wrested from soldiers after they rappelled from a helicopter to board one of the vessels.

Dozens of activists and at least 10 Israeli soldiers were wounded in the bloody confrontation in international waters.

Reaction was swift and harsh, with a massive protest breaking out in Turkey, Israel’s longtime Muslim ally, which unofficially supported the mission. Ankara announced it would recall its ambassador and call off military exercises with the Jewish state.

The bloody showdown came at a sensitive time in Israeli-Palestinian peace efforts. Israeli Prime Minister Benjamin Netanyahu was to meet Tuesday with President Barack Obama to discuss the next round in U.S.-led indirect negotiations, but Netanyahu called off the visit on Monday morning. From Toronto, Netanyahu spoke by telephone with top Israeli officials and expressed his “full backing” for the military, according to a statement from the army.

The White House said in a written statement that the United States “deeply regrets” the loss of life and injuries and was working to understand the circumstances surrounding this “tragedy.”

The activists were headed to Gaza on a mission meant to draw attention to the blockade, which Israel and Egypt imposed after the militant Hamas group seized the territory of 1.5 million Palestinians in 2007.

There were conflicting accounts of what happened early Monday, with activists claiming the Israelis fired first and Israel insisting its forces fired in self defense. Communications to the ships were cut off shortly after the raid began.

An Israeli commando who spoke to reporters on a naval vessel off the coast, and who was identified only by the first letter of his name, “A,” said he and his comrades were surprised by a group of Arabic-speaking men when they rapelled onto the deck.

He said some of the soldiers, taken off guard, were stripped of their helmets and equipment and thrown from the top deck to the lower deck, and that some had even jumped overboard to save themselves. At one point one of the passengers seized one of the soldiers’ weapons and opened fire.

A high-ranking naval official displayed a box confiscated from the boat containing switchblades, slingshots, metal balls and metal bats. “We prepared (the soldiers) to deal with peace activists, not to fight,” he said. Most of the 10 dead were Turkish, he added.

A Turkish website showed video of pandemonium on board one of the ships, with activists in orange life jackets running around as some tried to help an activist apparently unconscious on the deck. The site also showed video of an Israeli helicopter flying overhead and Israeli warships nearby.

Turkey’s NTV showed activists beating one Israeli soldier with sticks as he rappelled from a helicopter onto one of the boats.

Activists said Israeli naval commandos stormed the ships after ordering them to stop in international waters, about 80 miles (130 kilometers) from Gaza’s coast.

The broadcast ended with a voice shouting in Hebrew, “Everybody shut up!”

In a news conference in Tel Aviv, Israel’s military chief of staff and navy commander said the troops were able to take over the five other boats without incident and all of the violence was centered on the boat carrying most of the flotilla’s passengers, the Turkish-owned Mavi Marmara.

Troops were attacked, said Chief of Staff Gabi Ashkenazi, and an unspecified number of troops were helicoptered to hospital suffering from gunshots, knife wounds and blows.

“To me it is clear without a doubt, judging by what I saw and what I heard in the first reports from the soldiers, that in light of the danger to human life this violence required the use of weapons, and in my opinion the soldiers acted as they should have in this situation,” Ashkenazi said.

The ships were being towed to the Israeli port of Ashdod, and wounded were evacuated by helicopter to Israeli hospitals, officials said. Two ships had reached port by midday.

Many of the passengers were from European countries.

The European Union deplored what it called excessive use of force and demanded an investigation by Israel. The EU said the blockade of Gaza, now in its fourth year, is “politically unacceptable,” and called for an immediate, sustained opening of crossings into the Hamas-controlled territory, according to a statement by EU foreign policy chief Catherine Ashton.

Turkey called on the U.N. Security Council to convene in an emergency session about Israel.

Thousands marched in protest in Istanbul, some setting Israeli flags on fire after trying to storm the Israeli consulate. Israel quickly advised to its citizens to avoid travel to Turkey. In neighboring Jordan, hundreds demonstrated in the capital Amman to protest the Israeli action and demand that their government breaks diplomatic relations with the Jewish state.

Israeli security forces were on alert across the country for possible protests.

There were no details on the identities of the casualties, or on the conditions of some of the more prominent people on board, including 1976 Nobel Peace Prize laureate Mairead Corrigan Maguire of Northern Ireland, European legislators and Holocaust survivor Hedy Epstein, 85.

Palestinian President Mahmoud Abbas condemned the Israeli “aggression,” declared three days of mourning across the West Bank and called on the U.N. Security Council and Arab League to hold emergency sessions on the incident.

In Uganda, Ban condemned the deaths of the activists and called for a “thorough” investigation. “Israel must provide an explanation,” he said.

The activists were headed to Gaza on a mission meant to draw attention to a 3-year-old Israeli blockade of the coastal territory. Israel and Egypt imposed the blockade after Hamas, which it considers a terrorist group, violently seized the territory. Critics say the blockade has unfairly hurt Gaza’s 1.5 million people.

Before the ships set sail from waters off the east Mediterranean island of Cyprus on Sunday, Israel had urged the flotilla not to try to breach the blockade and offered to transfer some of the cargo to Gaza from an Israeli port, following a security inspection.

The violent takeover threatened to deal yet another blow to Israel’s international image, already tarnished by war crimes accusations in Gaza and its blockade of the impoverished Palestinian territory.

Organizers included people affiliated with the International Solidarity Movement, a pro-Palestinian group that often sends international activists into battle zones, and the IHH.

The Turkish group is an Islamic humanitarian group that is based in Istanbul but operates in several other countries. Israel recently arrested the IHH’s West Bank operative, but said his arrest was not related to the planned aid mission.

Hasan Naiboglu, the Turkish maritime affairs undersecretary, told the Anatolia news agency that Israel had jammed communications with the ships. He accused Israel of violating international law by carrying out the raid in international waters.

Turkey had unofficially supported the aid mission and has been vocally critical of Israeli military operations against Palestinians in Gaza.

The flotilla of three cargo ships and three passenger ships carrying 10,000 tons of aid and 700 activists was carrying items that Israel bars from reaching Gaza, like cement and other building materials.

This is the ninth time that the Free Gaza movement has tried to ship in humanitarian aid to Gaza since August 2008.

Israel has allowed ships through five times, but has blocked them from entering Gaza waters since a three-week military offensive against Gaza’s Hamas rulers in January 2009.

The latest flotilla was the largest to date.