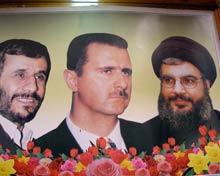 Hezbollah is running weapons, including surface-to-surface missiles, from secret arms depots in Syria to its bases in Lebanon, according to security sources.

The Times has been shown satellite images of one of the sites, a compound near the town of Adra, northeast of Damascus, where militants have their own living quarters, an arms storage site and a fleet of lorries reportedly used to ferry weapons into Lebanon.

The military hardware is either of Syrian origin or sent from Iran by sea, via Mediterranean ports, or by air, via Damascus airport. The arms are stored at the Hezbollah depot and then trucked into Lebanon.

“Hezbollah is allowed to operate this site freely,” said a security source. “They often move the arms in bad weather when Israeli satellites are unable to track them.”

Most of the weapons are sent from depots like the one near Adra and then stored at Hezbollah bases in the Bekaa Valley or southern Lebanon.

The revelation adds to growing fears in the West that the regime of Bashar Assad, the President of Syria, is becoming increasingly close to Hezbollah and its main supporter, Iran. Syria has long backed the Lebanese militant group, but until now most of those contacts have taken place on Lebanese soil.There are fears that if Israel and Hezbollah clash again — as happened in August 2006 — Syria could become directly embroiled in the conflict.

Israel reportedly planned recently to bomb one of the arms convoys as it crossed the border into Lebanon, but the operation was called off at the last minute. Western intelligence sources say that the Israelis have yielded — for now — to American diplomatic efforts to persuade Syria to stop the arms transfers. However, the apparent lack of success is increasing the chances that Israel may send a “calibrated signal” to Hezbollah and Syria by launching an airstrike against an arms depot or weapons convoy.

Jihad Makdissi, the spokesman for the Syrian Embassy in London, insisted that all military sites in Syria were exclusive to the Syrian military.

“Syria and Israel remain in a state of war as long as Israel refuses to implement UNSC [United Nations Security Council] resolutions to end the occupation of Arab lands; therefore if these military depots really exist it would be for the exclusive use of the Syrian Army to defend Syrian soil, and it is definitely nobody’s business,” he said.

Arming Hezbollah was banned under the provisions of UN Security Council Resolution 1701, which brought an end to the 2006 war. Since then, however, Hezbollah has managed to replenish its military stocks and the group is thought to have amassed more than 40,000 rockets and missiles, ranging from short-range Katyushas to medium-range M600 missiles and the Soviet-era Scud ballistic missile, which is capable of hitting most big population centres in Israel.

Yossi Baidatz, an Israeli intelligence officer, told the Knesset this month that the amount of arms being sent to Hezbollah by Syria and Iran could no longer be described as “smuggling”. He said it was an “organised and official transfer” of weapons and that the Scuds were “only the tip of the iceberg”.

Syria has denied arming Hezbollah with Scuds, but America and Israel insist they have hard intelligence to the contrary.

The Times has learnt that US and Israeli intelligence agencies suspect that two Scud missiles have entered Lebanon and could be hidden in underground arms depots in the northern Bekaa Valley. One source said there were indications that Hezbollah may even be considering returning the missiles because of the intensified scrutiny.

Western officials have repeatedly urged President Assad to halt the flow of weapons to Hezbollah. John Kerry, the head of the US Senate Foreign Relations Committee, visited Damascus in April and presented the Syrian President with evidence that Scuds had been transferred to Hezbollah, according to Western diplomatic sources. Mr Assad denied the allegations.

Western officials privately say that the Syrian leader is “flat out lying” about the arms transfers.