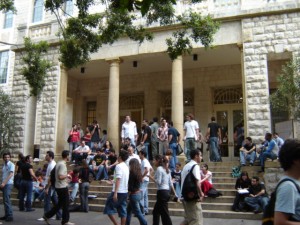 The American University of Beirut is applying a new tuition policy for the entering undergraduate class of fall 2011.

“The announcement that AUB was changing its tuition and financial aid policies prompted a strong—and mostly peaceful—reaction from many AUB students, who demonstrated on campus … and expressed their dissatisfaction in other ways as well,” the university’s president, Peter Dorman, said in a statement.

2.This new policy will not affect current AUB students.

3.AUB has promised to freeze tuition increases at 4 percent for the next three years.

4.The University will increase the amount of financial aid it provides for new financial aid students entering AUB in fall 2010 to ensure that they will not have to pay more than 25 percent of the additional cost involved in this new policy.

5.A majority of the increased revenues that AUB expects to realize from this new tuition policy will be used to provide financial aid grants.

6.The University will partner with local banks to facilitate and expand access to low interest (3 percent) subsidized loans, which will be available to both incoming and current students without the need to demonstrate loan collateral. For the first time, these loans will not be limited to students majoring in targeted professional programs, but in all students in each of the faculties across the University, made possible by AUB’s subsidy of interest payments while students remain enrolled in classes.

“In response to a request from the University Student Faculty Committee (USFC), I announced on May 24th that while AUB is committed to the new policy regarding tuition and financial aid, it will apply the new tuition base of 15 credit hours only beginning with the entering undergraduate class of fall 2011, one year later than envisioned,” Dorman said.

“Other parts of the new policy will be implemented immediately, as originally intended: the freeze on tuition increases at 4 per cent for the next three years and the availability of low-interest loans for all students,” he said in his statement.

“My announcement also contains a pledge to increase the transparency of the financial-aid award process through direct involvement of students where appropriate, and the added participation of students, parents, and socially responsible businesses in a campaign to raise funds for financial aid,” Dorman added.